A number of car shipments were turned away at the border last month because they were infested with Brown Marmorated Stink Bugs. The bug has spread across the globe from its original home in East Asia and is one of border security’s most wanted. 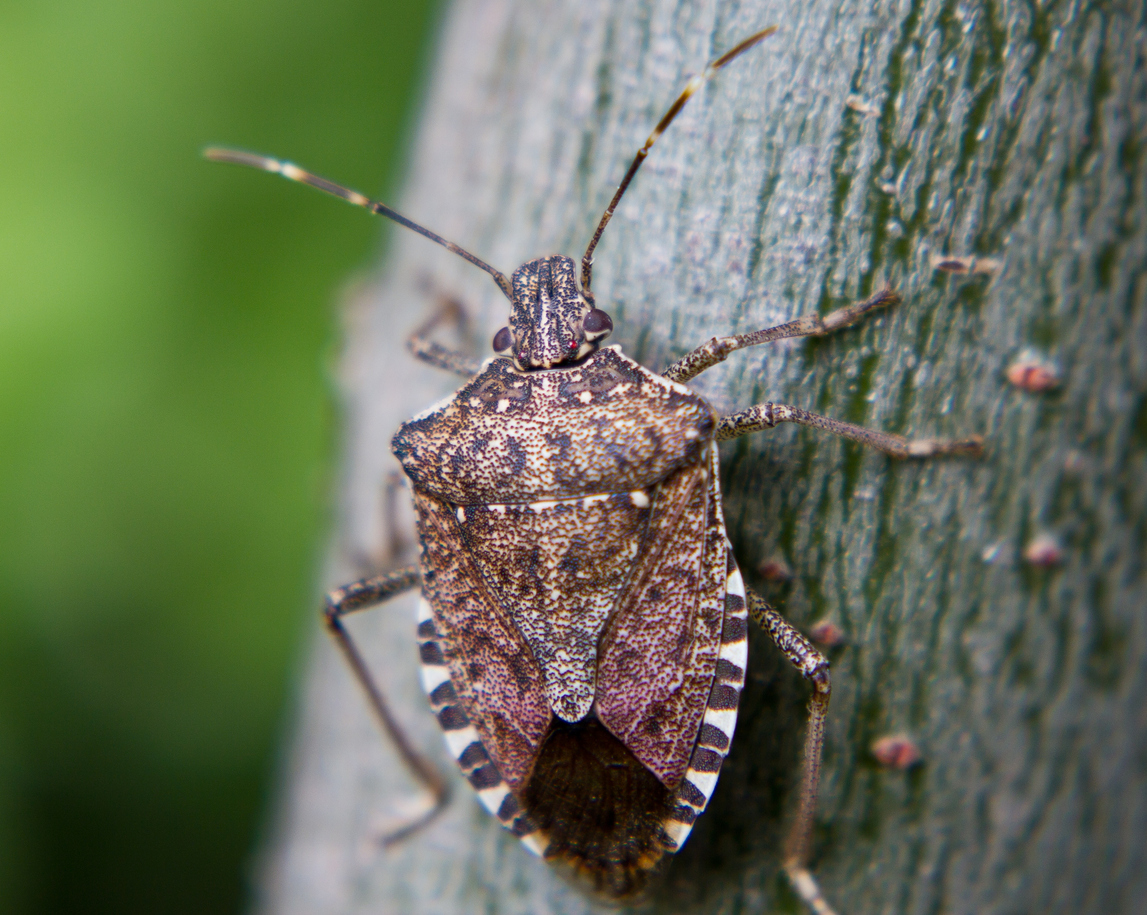 The agricultural pest is not currently in the country, but MPI has been asking the public to keep an eye out for the distinctive critter, which is much larger than our native stink bugs. Biosecurity experts are worried about the impact it might have on both native plants and agricultural exports.

Ahead of any future issues surrounding the invasive pest, the SMC prepared a Q&A with biosecurity experts. Feel free to use these comments in your reporting now or in the future.

What plants are we most worried about Brown Marmorated Stink Bugs affecting?

“The Brown Marmorated Stink Bug (BMSB) has over a hundred host plants and it is a pest of many vegetables, fruits and field crops.

“The largest economic impacts from BMSB in New Zealand are estimated to be in kiwifruit, apple and pears, vegetables, wine, other fruit and plant seeds.”

Why are we seeing more Brown Marmorated Stink Bugs showing up at the border?

“Increased interception data is consistent with outbreak populations of Brown Marmorated Stink Bugs in North America and Europe and especially from ports trading in goods (e.g. vehicles) to New Zealand, as well as the timing of northern hemisphere overwintering. [Note: The bugs invade homes in vast numbers in autumn looking for warm, protected places to ride out the winter].

“While many overwintering adults die on their way from the northern hemisphere to New Zealand, a small proportion become mobile as the temperature increases across the Pacific on their way here. Alarmingly, the Brown Marmorated Stink Bug has now been reported as invading at least one southern hemisphere country, Chile.

“Increased interceptions may also be the result of greater inspections in New Zealand as the risk has become more apparent. The reason for the recent increases in interceptions from Japan is not fully understood.”

What is currently being done to prevent invasion by Brown Marmorated Stink Bugs?

“Vehicles, machinery and other cargo coming out of USA and Italy have had to undergo mandatory pre-export treatment with methyl bromide, sulfuryl fluoride or heat since 2015 and 2017 respectively. This treatment is now being considered in Asia.

“Detector dogs have been trained to sniff-out Brown Marmorated Stink Bugs and are currently being used by MPI to find them on ships entering New Zealand waters and as they unload.

What other methods are researchers exploring?

“Using a surrogate stinkbug, work is underway to provide MPI with a full dataset on fumigants (methyl bromide and sulfuryl fluoride), heat, as well as the more environmentally friendly ethyl formate.

“Several studies have been instigated to examine whether biological characteristics, such as odour or sound can be used to detect Brown Marmorated Stink Bugs on their way to New Zealand or at the border.

“Considerable research on trap and lure development for Brown Marmorated Stink Bugs has been done in the USA, primarily for pest management purposes. Additional research, under contract to MPI, has been undertaken to develop fit-for-purpose trap/lure combinations for border use in New Zealand. The suitability of these traps for surveillance use was successfully trialled in Chile recently and the traps are being considered for New Zealand’s response plan.”

Are there any potential biocontrol agents?

“Extensive research in North America and Europe indicates that the local predators and parasitoids are not effective against the bugs and evidence to date would suggest that this will be the same in New Zealand.

“The most promising biological control agent for Brown Marmorated Stink Bugs is Trissolcus japonicus, a parasitic wasp which is not found in New Zealand. This very small wasp will only attack members of the Scutelleridae family (which has no species in NZ) and the Pentatomidae family (only 8 species in NZ).

“Research has been undertaken to determine its risks to non-target species and to understand its potential distribution in NZ.

“In New Zealand, the release of a classical biocontrol agent is subject to approval by the quasi-judicial Environmental Protection Authority (EPA), which implements the Hazardous Substances and New Organisms (HSNO) Act (1976).”

What plants are we most worried about Brown Marmorated Stink Bugs affecting? Are any of these taonga species or those of particular concern to Māori?

Are there any taonga species likely to be affected by the Brown Marmorated Stink Bug should it enter the country?

“The Brown Marmorated Stink Bug has a very broad host range and is likely to attack and damage many taonga species. For example, its preference for berries may put plants such as karaka or kowhai at risk. Additionally, we expect the flowers and seed heads of many species used for rongoā like harakeke to be attacked. Other important rongoā plant species (e.g. karamu/Coprosma) may also be attacked.

How do we stop it if it does invade New Zealand?

“There is always the potential for a biocontrol agent to be used, just as there is the potential for fumigants to be used if the Brown Marmorated Stink Bug invades Aotearoa. That, however, does not mean they should be or could be used. Part of TTW’s work is to understand the ‘cultural licence’ around possible responses to Brown Marmorated Stink Bug. We know Māori by-in-large do not support biocontrol’s and or toxins, so we will continue to work with whānau, hapū, and iwi to determine what options are acceptable and articulate those options to the appropriate people, organisations, and agencies.”

How is the Māori Biosecurity Network involved?

“Te Tira Whakamātaki (TTW), the Māori Biosecurity Network has been trying to raise awareness of the Brown Marmorated Stink Bug with Māori communities since late 2016. In April 2017 we released an information paper on the stinkbug which included information on the bug, the risks and one proposed solution.

“TTW then discussed the Brown Marmorated Stink Bug with whānau, hapū and iwi at our 2017 regional hui, and has been keeping in regular contact with members of the Brown Marmorated Stink Bug steering group as they prepare for a possible incursion. TTW will also work with whānau, hapū and iwi to develop responses, plans etc. should they be required or requested.”

Any particular issues for Māori?

“The potential effects of Brown Marmorated Stink Bug for Māori could be widespread aside from their potential disruption to the aiōpipi (calm) of the taiao (environment). Impacts on Māra Kai, Rongoā Māori, taonga species and the whole ecosystem will be broad and will upset the balance of nature. Additionally, Brown Marmorated Stink Bugs are known to be a household nuisance with large numbers hibernating in whare, this will be an issue not only for whānau but marae.”

What is the worst-case scenario based on invasions in the US and Europe?

“The Brown Marmorated Stink Bug would cause high levels of economic damage, especially in apples, pears, peaches, and apricots, maybe also kiwifruit. The kiwifruit industry estimates fruit loss could be up to 30%. In a worst case scenario, outbreaks could also be expected in macadamia and several vegetable crops such as tomatoes, capsicum and sweetcorn.

“NZ growers would drastically increase the use of broad-spectrum insecticides to prevent significant losses (four-fold in US apples). This could lead to higher residue levels in fruit and vegetables and would have detrimental effects on beneficial insects (predators, parasitic wasps, pollinators), leading to the outbreak of secondary pests (mites, aphids, scales).

“Most importantly, it would be a huge setback for sustainable pest management programmes and a serious threat for organic growers. The wine industry could be affected because only a few bugs feeding in grape clusters during harvest may taint grape juice and affect wine quality.

“People would have to deal with large numbers of Brown Marmorated Stink Bugs entering their homes and sheds as they like to overwinter in protected environments. Some people may show allergic reactions to stink bug secretions, excrements and other remains. If Brown Marmorated Stink Bugs were to establish in NZ but not in Australia, we could expect trade restrictions.

What is currently being done to prevent invasion by Brown Marmorated Stink Bugs?

“A lot. The Ministry for Primary Industries (MPI) requires that high-risk goods such as vehicles, machinery and tyres from the USA or Italy must be fumigated or heat treated before shipment. Inspections at the border are carried out.

“MPI also runs an awareness campaign with posters and a video that explains how Brown Marmorated Stink Bugs can be identified and asks the public to report suspicious bugs. Stakeholders such as the Kiwifruit industry actively support MPI’s biosecurity policy.

“At the Bio-Protection Research Centre this involves research aimed at developing new tools such as stable isotope analysis to find out the geographic origin of detected bugs. Another project by my PhD student Laura Nixon has assessed the feasibility of finding Brown Marmorated Stink Bugs in shipping containers by detecting typical bug odour compounds.”

What areas are most at risk of invasion by Brown Marmorated Stink Bugs?

“Most interceptions occur at Ports of Entry with the Brown Marmorated Stink Bug discovered mostly in cars being imported to the country. Hence in terms of invasion, the greatest risk would be Auckland with the highest amount of imported cargo. This would be followed by other areas with the risk proportional to the amount of cargo being imported. ”

How will climate change affect the potential of Brown Marmorated Stink Bugs to enter New Zealand?

“With climate change conditions applied to the model, a distinct movement of the high suitability areas to the South is evident. Large areas of the South Island as well as the Southern areas of the North Island become more suitable for invasion and as such increases the likelihood of establishment in New Zealand and impact to crop production.”