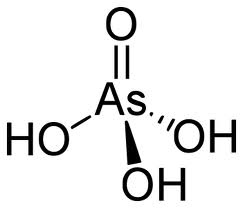 NASA researchers have discovered a strain of bacteria in a lake in California that uses arsenic as one of its nutrients, increasing the potential for finding new forms of life on Earth and beyond.

The scientists, who today published their research in the journal Science, say the discovery shows the potential for life beyond the elements that had been considered essential.

The discovery isn’t of extraterrestrial life itself.

Instead, the scientists have discovered a strain of bacteria which is able to substitute the (toxic) element arsenic for the (until now essential) element phosphorus.  Phosphorus is used by all living organisms in a range of different structures, from DNA, to proteins, to making energy.

Arsenic, which is below phosphorus on the periodic table, had been hypothesized as a possible substitute due to its many similarities with phosphorus.  However, it is also thought that much of its toxicity is due to the fact that while it can be used instead of phosphorus for some biological processes, these processes then break down in later stages due to the instability of metabolites containing arsenic instead of phosphorus.

The strain of bacteria in question, GFAJ-1 of the Halomonadaceae, was isolated in Mono lake in eastern California which contains more arsenic, and is far saltier and more alkaline, than usual.  Using a number of different testing methods, the scientists were able to show that the bacteria could replace phosphorus with arsenic, countering the toxicity that normally arises, although it did have impacts on their physiology.

The discovery means that the scope of the search for life outside of our planet can be widened: while Earth-based organisms are based on the ‘big 6’ – carbon, oxygen, nitrogen, sulphur, hydrogen and phosphorus – other organisms may not be.

The SMC asked local experts to comment on the discovery and its implications:

Associate Professor Vic Arcus, of the Department of Biological Sciences at the University of Waikato, comments:

“Fascinating. In my opinion, this paper is a small, but very significant step towards the biggest of biology questions! The question goes something like this:

“All of life on earth (from the smallest virus, to the largest whale) is based on DNA and/or RNA – two very similar molecules which carry life’s information. Could there be life on earth (or anywhere else for that matter) which is based on some other sort of chemical that carries the information?

“In principle, the answer is yes.

“The most important result in this paper is that the bacterium that they have characterised appears to be able to use arsenate in place of phosphate. This is cool and interesting because phosphate is the chemical which links A,T,G and C together in DNA. And perhaps equally as importantly, phosphate in the form of ATP is the primary storage mechanism for energy in the cell. Thus, in two fundamental respects, this organism is able to use (slightly) different chemistry in its information carrying molecules and its energy carrying molecules.

“As far as the implications for astrobiology… that seems a stretch to me.

“Far more interesting, I reckon, is the possibility that in ~4 billion years on Earth, other forms of “life” that use different chemistry altogether might be present and we are so preoccupied with DNA that we haven’t looked hard enough for these other things. Where would you start? These researchers have made a small but significant start in this hunt.”

Dr Anthony Poole, Senior Lecturer in Genetics at the University of Canterbury, comments:

“The big thing is that we all think of phosphate as being a fundamentally important part of the building blocks of life. What this research reports is a species of bacterium that can incorporate arsenate into DNA in place of phosphate. This is unprecedented in biology.

“There are several important implications:

“First, it was previously thought life would absolutely need phosphate. This new knowledge challenges our understanding of the fundamental chemistry of life and broadens the known conditions under which life can thrive. As well as broadening our knowledge of life on Earth, this type of knowledge will inform efforts to look for life elsewhere in the solar system.

“Second, it shows very clearly that DNA is not a static molecule – the chemical foundations of the genetic material can be changed, so both the material itself and the content are subject to evolution. Nucleic acids such as RNA and DNA are made of three basic components: a sugar (ribose for RNA, deoxyribose for DNA), a phosphate linker, and bases – (A)denine, (C)ytosine, (G)uanine, (T)hymine for DNA, and A, C, G, (U)racil for RNA. We know that DNA evolved from RNA, and this involved two evolutionary steps – altering the sugar from ribose to deoxyribose, and replacing U with T.

“Both genetic materials exist today (cells carry DNA genomes and viruses such as influenza carry RNA genomes). The new study shows that the phosphate linker can also be replaced because the DNA of the GFAJ-1 bacterium can incorporate arsenate linkers instead of phosphate. This should not affect the genetic information carried in the DNA, but it does expand the number of chemistries we can associate with genetic information.

“Finally, if arsenate is also incorporated into RNA and proteins, as the authors suspect, this could have profound implications for the biology of the organism, since it may subtly alter the way in which macromolecules perform chemical reactions in the cell.”

Dr Eng Wui Tan, of the Department of Chemistry at the University of Otago, comments:

“The paper describes a strain of terrestrial bacteria that can substitute arsenic in place of phosphorus in its physiology.  The significance of this finding is that phosphorus is believed to be an essential part of the the genetic information system within all terrestrial living organisms, DNA and RNA.  Hence, phosphorus is required for life.  The implication that DNA and RNA need not be in the forms that we currently know changes our understanding of “Life – as we know it”.  I can see why NASA is interested, as searching for extra-terrestrial life is one of their missions.  When our understanding for what is necessary for life expands their search criteria would too.

“Chemically, arsenic and phosphorus are very similar.  Their molecules react the same way but at different rates.  It has been speculated that early life could have used arsenic instead of phosphorus as there was much more arsenic than phosphorus in the primordial oceans.  The surprising thing about finding it in DNA and RNA is that the arsenate equivalent would be expected to be orders of magnitude much less robust.  Perhaps that’s why the bacterium in the paper still grows “considerably better” when it gets phosphorus.”

Dr Ted Baker, Professor at the School of Biological Sciences at the University of Auckland, comments:

“This is a very intriguing report. We know that living organisms, and especially microbes, can evolve in unusual environments. In this case the organism can grow on arsenic and although the data are not conclusive they do suggest that its DNA may be built on arsenate instead of phosphate. Arsenic is a poison because it is chemically similar to phosphorus, but produces less stable compounds. As a result arsenic causes some fundamental biological processes to go wrong.

“This report suggests that the organism has adapted to use arsenic and gives some support to the idea that “parallel life systems” could exist using different combinations of chemical elements. And that an element we think of as essential (phosphorus) could be substituted by one we think of as a poison (arsenic) through evolution in a different environment. Microbes are so amazingly diverse that we will surely find other strange examples if we look.

“There is nothing unusual about microbes living in what we think of as strange environments (boiling pools, concentrated acid). In this case the bug can grow using arsenic – but it actually does better with phosphorus.”

[Note: the paper can be accessed by registered journalists in the SMC Resource Library]