UPDATED: A snapshot of New Zealand’s science and innovation system has laid out where we are doing well and where there is room for improvement compared to other small advanced economies. 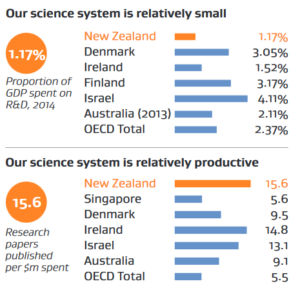 The Science and Innovation System Performance Report was published yesterday by the Ministry of Business, Innovation and Employment and is intended to benchmark performance of the sector over time.


– The research sector is relatively small, but efficient when it comes to scientific publications produced per research dollar.
– R&D expenditure has grown 77% since 2000, but progress towards the Government’s goal of business R&D surpassing 1 per cent of GDP is “slow but steady” (estimated at .60% in 2015).
– New Zealand produces relatively fewer graduates in STEM subjects (science, technology, engineering and maths) than other Small Advanced Economies but numbers are growing.
– We have strong expertise in niche areas like astronomy, energy and physics, but do relatively little research in these areas.

The SMC asked innovation experts for their reaction to the report. Feel free to use the comments below in your reports.

“We know that world class science is carried out in New Zealand, providing new knowledge, new expertise and new intellectual property, that can be put to use for economic and social benefit.

“We also know that we need to collaborate and develop networks between science, industry and universities to innovate effectively, supporting entrepreneurs who bring the value of our science investment to society.

“It’s still difficult though, to understand the complexity of the interconnected elements in the system – where are the strengths, the weaknesses – to know what we can improve.

“It’s heartening therefore to see this report, the first in a series, that sets out the detail of how we think the system works for the whole nation. Down the line, I’d like to see future reports highlighting cultural, artistic and community innovation.”

Shaun Hendy, Professor of Physics at the University of Auckland and Director of Te Pūnaha Matatini comments:

“MBIE have produced their first science and innovation system performance report since MoRST and then MSI were folded into Steven Joyce’s super-ministry. We had a taste of MBIE’s new approach with the National Statement of Science Investment (NSSI) that was published last year and made extensive use of bibliometric data to try to benchmark our science and innovation system.

“This new report updates some of the statistics we saw in the NSSI, but for the most part takes a new approach to presenting the data that MBIE are able to access. We can expect the quality of this data to improve as the Science and Innovation domain plan is rolled out over the next few years, but for the time-being, we must make do with what we have and this should engender some scepticism in what is presented.

“Nonetheless, the data we do have paints the picture of a science and innovation system that performs well on a per dollar basis, but one that could do with further investment. Relative to the small advanced economies, our recent performance has remained decidedly mixed across a range of measures.

“While MBIE awards itself a pass mark on its goal of lifting business R&D to 1% of GDP by 2018, for instance, the data in the report provide little assurance that this is on track. Despite all the attention that business R&D has received in the last few years, it remains anaemic. This is very disappointing as it limits the long term growth of our economy.

“One statistic I track with interest is the number of post-doctoral fellowships available for early career researchers. This took a significant hit a few years ago when this government cut our national post-doctoral fellowship scheme. The numbers in this report suggest that the rest of the science and innovation system has not filled the gap left by this scheme, but at the same time this deserves further scrutiny.

“As Nicola Gaston, past-President of the NZAS, pointed out on Twitter (@nicgaston), it doesn’t seem credible that GNS Science had no post-doctoral fellows employed in 2015 as the report seems to suggest. I look forward to seeing improved reporting of this and other statistics in coming additions.”

1. This is a commendable and very instructive report that may be useful in guiding research and innovation funding policy developments.
2. No surprises really in the graphs (some of which require some study to understand well) on research outputs – NZ does some great science research continues to do well on international comparisons in research outputs per million dollars expended on research. We are relatively well cited in relation to our quantum of research outputs
3. BERD has increased since 2010 in absolute dollar terms but only increasing very slightly as % of GDP. This is something that we were hoping would shift significantly as a result of the Powering Innovation Review in 2011 but it seems that government initiatives to stimulate greater BERD have not been particularly successful.
4. BERD (business expenditure on R&D) is showing a predictable shift into areas around IT and the more high tech items.
5. We are still failing to engage small business with R&D and see significant R&D expenditure from these firms. The exception is in high tech start-ups and young companies where R&D will be a high expenditure item.
6. Figure 20 shows a worrying lack of growth over the past few years in our BERD by business size as a proportion of GDP by comparison with other countries, particularly with large companies.
7. Patent filing by NZ still low per million population, but similar to Australia and Ireland.
8. Our economic complexity should be growing but is declining over time.
9. Total GERD (gross domestic expenditure on R&D) in NZ is still about half OECD average as a percentage of GDP.
10. Figure 29 shows an encouraging picture of growth in BERD/GOVERD (government expenditure on R&D/HERD (higher education expenditure on R&D) but when normalised against GDP the results look flat. We are still not out-investing to get out-performance that would lift New Zealand up the OECD ranks.
11. We are down among the pack in terms of researchers per 1000 employed – no surprises in this part.
12. Efforts to increase the number of students in STEM (Science, Technology, Engineering, Mathematics) higher education have had a marginal effect so far. This is a critical thing to sort out for New Zealand’s future. We need to revisit the effects of introducing the NCEA system and ensure that we have a secondary school system that retains students in maths, physics and chemistry to Year 13 and with the teaching/learning methodologies fit for purpose, taught by teachers who are well qualified to do so.
13. Inward migration of STEM professionals helping a bit.
14. Doctoral graduation rate in New Zealand encouraging compared to OECD average.

“My overall view is that we are measuring what we do much better than formerly. We understand where we lag behind other advanced nations in R&D investment. Since 2010 there have been significant increases in GOVERD but we are still barely holding station when normalised against GDP.

“BERD has increased but again is hovering just over 0.5%GDP. In the Powering Innovation Review we recommended that NZ would need to significantly increase investment in R&D to nearer OECD average levels as %GDP to get the economic benefits sought.

“We have an ongoing need to stimulate and grow BERD. Our recommendations of five years ago would remain the same today.”