Following last night’s earthquake off the coast of Indonesia, the global network of Science Media Centres collected the following expert commentary to provide background and context on the situation. 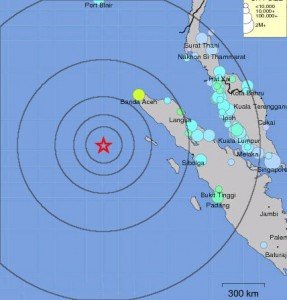 Professor Kevin Furlong from Pennsylvania State University is currently in the US and is working with the US Geological Survey on this disaster after returning from a sabbatical as the Visiting Erskine Fellow at the University of Canterbury (where he experienced first-hand the Canterbury Quakes). He comments:

“The 11 April 2012, Mw 8.7 earthquake west of Banda Aceh, Sumatra, Indonesia is a very large earthquake within the Indo-Australian plate. Although it is within the plate, its occurrence is almost certainly linked to the plate interactions between Indo-Australian plate and Indonesia (part of the Sunda segment of the Eurasian plate). This earthquake reflects a style of faulting (strike-slip) which involves principally horizontal motion, and thus is unlikely to generate a significant tsunami; although very strong ground shaking would be felt on Sumatra. This is also an extremely large magnitude earthquake for this style of faulting, meaning that it likely involved substantial fault movement, and the fault likely extends for 200+ km.

“This earthquake is of the same style of faulting and in approximately the same location as a Mw 7.2 earthquake on January 10, 2012. Although this earthquake was within the Indo-Australian plate, any earthquake of this size will change the stress regimes acting on the nearby plate boundaries. The result is that stress conditions on the subduction plate boundary beneath Sumatra have changed, although the implications of that change are uncertain.”

“According to the USGS website the magnitude 8.7 earthquake occurred well offshore, at least 300 km west of Sumatra so the damage onshore on Sumatra is likely to be minimal. The magnitude may well be decrease to 8.5 or 8.4 after more analysis. The epicentre is well west of the plate boundary and in the Indian Ocean, a fracture along the hinge where the subducting slab of oceanic crust starts bending downward and under Sumatra. The mechanism seems to have been predominantly strike-slip i.e. no substantial vertical displacement of the sea floor so any tsunami would be small and local.”

“Critical information that is required to assess the potential for a tsunami is the location, magnitude, depth and faulting mechanism. Tsunamis are caused when vertical displacement of the seafloor occurs. In the case of the 11 April earthquake, an earthquake of this magnitude (8.7 Mw) has the potential to generate an ocean-wide tsunami. However, although the earthquake is relatively shallow and offshore, the data indicate that the earthquake was the result of movement on a strike-slip fault. Strike slip earthquakes are caused when two blocks move horizontally past each other. Such an earthquake would not lead to the vertical displacement of the sea floor that would be required to generate a tsunami. Consequently, the potential for a large tsunami from this earthquake is likely to be low.

“The Sunda trench region is highly active. Earthquakes here are related to subduction of the Indian plate beneath Eurasia. Today’s earthquake occurred on a structure related to the subduction that is occurring here. The tectonics of the region are complex and large earthquakes are relatively frequent. The aftershock sequence has started and this includes an earthquake of magnitude 8.3.

“Although large, the 08:38 UTC earthquake is located approximately 400 km from the coast of Banda Aceh. As such, the potential for significant damage caused by ground shaking is likely to be relatively low although the actual impact of the earthquake in this region has yet to be confirmed.”

How many and what size aftershocks might we expect?

“When an earthquake occurs, it releases stress that has built up over time, along a fault. However, in addition to releasing stress, it redistributes the stress along that fault, and sometimes these will be redistributed to other nearby faults. In the case of the 11 April 2012 earthquake that occurred off the west coast of Northern Sumatra, the preliminary estimate of magnitude by the USGS is M8.6, and hundreds of km of fault may have been affected. With the redistribution of stress, aftershocks occur, for weeks, to months (and sometimes years) after the main shock. The magnitude 8.6 earthquake will result in aftershocks occurring all along the fault on which the original earthquake occurred. Some scientists say that one can expect aftershocks as much as 1 unit less than the original shock. So in this case, we might expect aftershocks of all sizes, but as big as a magnitude of about 7.6 (which would be in itself a concern of potentially triggering a tsunami).

“After an earthquake occurs along a fault, stress is released in parts. But then, part of this stress is redistributed to other parts of the fault. This means that they are now more likely to become unstable, with many subsequent earthquakes. Aftershocks can continue for weeks and months after the main shock (the biggest earthquake in the sequence), sometimes even years.

How frequent have earthquakes been over the last century and are they increasing?

How much energy is released in a magnitude 7 earthquake?

“Equivalent to the energy released in half a megaton nuclear bomb.

How much energy is released in a magnitude 9 earthquake?

“Equivalent to 1000 times the energy released in a magnitude 7 earthquake, or one thousand half-megaton nuclear bombs. If we converted this to energy, this would be roughly enough to power every home in the USA for 50 days.

How accurately can an earthquake like this be predicted? Why is it so difficult to predict the timing of earthquakes?

“For a complete prediction, we need to tell people when a disaster will occur, where, and how big. As scientists, we have a good idea of where large events might occur based on written and instrumental records of past events. So for instance, we know that Indonesia is near subduction zones, and that there is an extensive history of earthquakes in the past, so we know that Indonesia is likely to experience earthquakes. Based on these past records, we can also forecast the chance that a given size or larger earthquake might occur, in a given year. This is called probabilistic hazard forecasting, and has been very useful in telling us about how big we might expect, on average, each year. But true prediction is much more difficult, where we tell people that ‘next week there will be an earthquake of magnitude of 9’. Although scientists have been trying for many years to predict earthquakes (the when and how big), they so far have not succeeded, but are still working at it.”

From the Canadian SMC:

“If there is a large earthquake far from the ocean, on land, there is no tsunami. The earthquake itself needs to be shallow – some 20 or 30 km below the ocean bottom before it can generate a tsunami, and it needs to be a dip slip, like a subduction. The movement needs to be vertical, not horizontal. In today’s earthquake in Indonesia, the movement was horizontal, because the Indian plate slid past the Burmese plate. In 2004, the Indian Plate went under the Burmese plate, and tens of cubic kilometres of water were suddenly displaced and piled at the ocean surface. This is what causes a tsunami.

How do early warning systems work?

“There are many different kinds of detectors, and one can never depend on just one set of detectors. First, the earthquake itself has to be detected. This is done by seismographs, and these are mostly on land. Earthquake waves propagate through the interior of Earth’s crust, as well as earth’s surface.
We also have ocean-bottom pressure sensors. There are several dozen all around the ocean. They are the first indicators of a tsunami. Then we have tidal gauges, on land but on the coast, put in the water, and they catch the tsunami coming in. By then it’s usually too late.

“Indonesia has an early warning system. But all the international agencies work together. They are all part of the Intergovernmental Oceanographic Commission, and that’s all coordinated by UNESCO.

Have there been any changes in the tsunami warning system since 2004?

“Following the disaster in 2004, the first early warning systems were placed in the Indian Ocean.
With each disaster we learn new things. On the scientific side, we already know the physical principles but we fine-tune our computer models and we make our instruments more precise. The physical process is the same. On the social and economic side, there has been progress, for example, with evacuations.

“When a cyclone hits in the area, almost all the damage and loss of life comes from the storm surge. In developing countries like India and Bangladesh, they use a ‘vertical evacuation system’. Because you can’t evacuate millions of people from the area, the infrastructure and the roads just aren’t there. So they built cyclone shelters on the coast, that are well built and can withstand storm surges and cyclones. In the US, they use a ‘horizontal evacuation system’, because the highways are good and the roads are there so people just move away from the coast.