Costly clean-ups for ‘P’-contaminated homes have been grabbing headlines, but what are the real risks facing a family moving in? 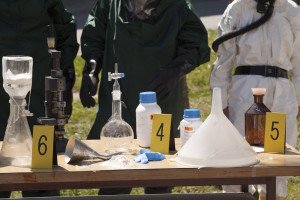 Media have reported on figures released that  show the number of state houses testing positive for methamphetamine contamination (from use or manufacturing) is increasing. There have also been a number of media reports of other homes discovered to be ex-meth labs, leading to calls for increased protection for home buyers.

“When addressing problems associated with contaminated houses, we are dealing with two separate issues: a house where someone smoked methamphetamine, or a house that was used to manufacture methamphetamine.

“However, people dwelling in a house where previous tenants had smoked methamphetamine, and there is some evidence of low concentrations on surfaces, have minimal risks of toxicity.

“The risks would be similar for people who live in a house that had previous dwellers who smoked cigarettes or marijuana. They will have exposure to these drugs but the concentrations will not be sufficiently high enough to cause either psychoactive or toxic effects to people who may have had inadvertent, and brief, dermal contact with these surfaces.”

“It is worth pointing out that the risks associated with sites contaminated as a result of ‘P lab’ operations include exposure to methamphetamine but also to other chemicals used in/or resulting from such operations, including solvents, by-products and waste, which may have additional health implications.

“The testing that ESR undertakes gives an indication as to whether the methamphetamine was manufactured at the site, but we can’t rule out that the contamination is from methamphetamine use.

“We can’t comment on the testing that is undertaken by commercial operators for remediation purposes. Sensitivity (and specificity) may vary depending on the techniques being employed by different operators.”

Are there testing standards that commercial operators must adhere to?

“Not to our knowledge in regard to New Zealand.  A number of overseas jurisdictions have promulgated testing standards. However, Standards NZ has recently established a committee that will begin looking at introducing standards for commercial operators.”

Does this industry need greater regulation?

“ESR is aware of concerns expressed in this field and supports the work initiated by Standards NZ.”

“From an industry outsider perspective it has been interesting to see almost all of the focus on removal of the methamphetamine residues themselves, e.g. this page.   I don’t disagree with most of the content of that, but a wider reading of the guidelines should indicate that there are at least complementary risks around the types of other chemicals that were used in the manufacturing process.

“These chemicals vary depending on the ‘cooking’ process, so it is not safe to generalise, but a list of common known chemicals includes: hydrogen chloride, lead, iodine, mercury and volatile organic compounds. The guidelines then go on to outline which of these are regarded as the most important, in relation to exposure pathways and toxicity.

Exposure pathways inside the home

“Inhalation relates to volatile chemicals, and these are primarily the organic solvents that were used in meth manufacture.

“A key priority in site remediation should therefore be to ensure that residual concentrations of solvents in the air are below relevant guideline levels or non-detectable.  This can start with removing and replacing soft furnishings and keeping doors and windows open for an extended period, but in severe cases might require removal and replacement of the wallboards or perhaps material inside the ceiling cavity.

“Skin absorption relates more to chemicals that are not volatile, or semi-volatile.  Although solvents (on a surface) could be absorbed through the skin, they won’t remain as a film on the surface for long and the total absorbed dose would be small.

That leaves the question of how high could methamphetamine residues get before they were no longer at a safe level? I personally don’t think it is (or will ever be) possible to accurately specify that, for several reasons.  These include:

“We can contrast breathing and skin contact.  For inhalation (breathing) we know the approximate volume or air that an adult or child breathes each day, and we know that the lungs are efficient at absorption, and we know that if a certain concentration exists in air, we can reliably estimate the inhaled and absorbed dose.  We can’t do that for skin contact – there are too many unknown variables.  For these reasons my own view would be that calls to specify a higher “no longer safe” level of methamphetamine are calls for something that is technically unachievable.

“However (as noted above) I am reasonably confident that the if the precautionary guideline is met, then any exposure would have to be negligible.  In doing a risk assessment, we often refer to a source -> pathway ->  receptor (=people) model.   To have a risk, all three elements need to be in place.  In a case where we are uncertain about pathway factors (as we are with skin contact here) the most reliable approach to removing risk is either to effectively remove the source (achieved here by setting a suitably low guideline value), or else remove the receptors (stop people from living there).

“Having said this my guess is that in most cases, quite high levels of (non-powder) methamphetamine on a surface may pose minimal risk because I suspect the timescale of skin absorption would be sufficiently long for the dose in general blood circulation to always be negligible (never get very high).   But I can’t know.

“Traces of free methamphetamine powder would of course be a different matter.

“In the garden where chemicals or residues may have been dumped or buried, the main potential exposure pathways are through direct ingestion (e.g. a toddler eats some contaminated soil), direct dermal contact with possibility of ingestion (the toddler comes across a discarded chemical drum).  Other pathways there include potential for uptake in home grown vegetables and contamination of groundwater which might lead to a borewater supply if it is a rural property – but both of these really have limited potential to add up to any significant exposure.

“A number of chemicals that can be used in meth manufacture are corrosive (acids), directly toxic (the heavy metal mercury) or strongly alkaline (sodium hydroxide).  Contact with any pools of acidic or corrosive chemicals might also cause direct effects such as chemical burns.”