Houses in South Dunedin are at risk of sea level rise, but there has been debate over figures suggesting thousands of homes could be affected by 2034. 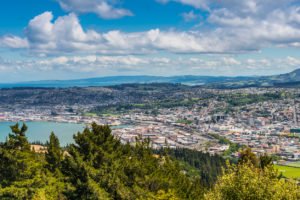 Emeritus Professor Jim Flynn told the Dunedin City Council on Monday that parts of the city could have just 17 years before sea level rise makes them uninhabitable. He was responding to a report that pumps to clear water would be needed in South Dunedin by 2040 and told councillors the issue would come to a head before that.

However, climate change researchers have disputed the claims.

Victoria University of Wellington’s Professor Tim Naish told Newshub that Prof Flynn was “right to be raising the issue as a real concern, but I have a little bit of concern that his numbers are slightly on the high side, or very much on the high side”.

“I agree that there is evidence that the two large ice sheets [Greenland and the Antarctic] may contribute more to sea-level rise in the future than previously thought, but I would think it is very unlikely that South Dunedin will be under 5m of water in 2090.”

The claims and counter-claims have been covered by local media, including: