New Zealand’s use of ‘hot air’ credits from Ukraine and Russia means we are cheating on our climate commitments, says a new report from the Morgan Foundation. 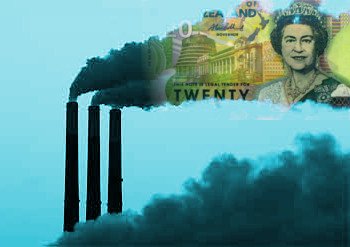 The report, Climate Cheat, released this morning, outlines the rise of questionable carbon credits provided by the Ukraine and Russia in  2011-12, and New Zealand’s use of these ‘hot air’ credits to meet our climate commitments.

“The Climate Cheats report, authored by Geoff Simmons and Paul Young, makes for sobering reading.  It confirms what many of us have been concerned about for some time – that the Government has been misleading us about the integrity of its emission trading arrangements.

“The wider implication is that the Government has been deliberately looking the other way, and NZ has in essence become a “dodgy carbon haven”.  The Government was warned (e.g. by the Ministry for the Environment) but did not react promptly, about the erosion of environmental integrity that the importation of dodgy credits entailed. That is worrying. The report argues that the Government was either reckless and negligent or a willing party in using fraudulent credits, quite possibly to ease its task of meeting New Zealand’s 2020 target.  Either way, there are serious questions here for the Government to answer.

“Where does the Government go from here?

“First best, I’d like to see the NZ Government abandon the ETS, as I suggested recently in my book, Time of Useful Consciousness. A carbon charge with full recycling would be much simpler and more transparent. But I accept that this may not happen, as an ETS does have attractions. So, at the minimum, New Zealand needs to clean up its international trading act, as Simmons and Young argue. NZ should not deploy any dodgy units in meeting future targets. Meeting our 2030 target should not be conditional on unrestricted credit trading. And all our actions should seek to repair any reputational damage we have suffered. The most important thing NZ can ultimately do is adopt ambitious carbon reduction goals and produce a serious plan to achieve them. We need to get on with real carbon reductions. Time is running out.”

“The Morgan report is clearly designed to put pressure on the government as its consultation on the NZ ETS is coming towards its close. Does the report tell us anything we didn’t really know already? On the whole not, what is striking in the report is the emotive language used. Perhaps this is politics but it makes us researchers uncomfortable.

“This said my own research highlights the problem of imported ‘hot air’ and how detrimental this has been to NZ ETS. The issue here was that we allowed unlimited importation into the scheme and then the government was slow to respond when issues did materialise with imported credits. When the government did intervene to ban certain imported credits the system regained some of its independence. Since we withdrew from international trading altogether the price has rebounded and I suspect it will keep rising as the 1 for 2 deal is removed. We have gone from allowing unlimited importation to having none (by withdrawing from CP2). This strikes me as naïve more than anything, and it is telling that all ETS’s other than our own had some limit on importation with no other system allowing more than 20 percent importation.

“Clearly, going forward, having some limit on importation would be sensible. Also trying to reduce the overhang of banked allowances seems sensible and the right thing to do since some of these allowances are of dubious provenance. But careful thought needs to be given into how this might be done. There is a danger of fiddling too much with the scheme, which could cause a lack of confidence in the system and volatility in the prices – for example, their suggestion to freeze free allocations for a year. Perhaps a more sensible approach would be to reintroduce the yearly drop in free allocation rates. As the NZ ETS review team notes “The original NZ ETS legislation called for free allocation rates to drop at 1.3 percent per year from 2013”

“The Morgan Foundation’s findings that New Zealand’s Emissions Trading Scheme (ETS) is fraudulent and New Zealand’s net emissions 2020 target will be met fraudulently are unsurprising. For several years those of us who have studied the ETS have been saying that policy settings made it morally bankrupt and ineffective.

“Hot air credits from the Eastern block countries, mainly from the Ukraine, were selling for as little as 17 cents per tonne while New Zealand Units (NZUs), our domestic carbon currency, were selling for around $3. This led to all sorts of morally dubious, but entirely legal, behaviours among traders and emitters in New Zealand. The net results were that our greenhouse gas emissions continued to rise rapidly, many people made money by doing absolutely nothing for the environment, a large mountain of unused NZUs accumulated in our registry (equivalent to about 4 years of surrender requirements) because emitters surrendered cheaper hot air credits to account for their pollution and either sold or banked NZUs, and forests continued to be converted to other uses while very few new ones were being planted.  The difference between hot air credit and NZU prices meant that we taxpayers effectively paid people to pollute.

“The Minister may be tempted to respond that hot air credits have not been legal tender in our ETS since mid 2015, but the Minister’s government is planning to use those same hot air credits to claim that New Zealand has met its 2020 target.

“Moreover, the government seems set to create credits out of thin air, that have no environmental value, for auctioning to try to keep the price of NZUs down. In fact, the government has a long history of creating thin air credits, having used them to “grandfather” credits to polluters for their “allowed” emissions, and also as random gifts to various players as compensation for losses of land value (to owners of forests planted before 1990) or as “fiscally-neutral” incentives (in the case of people establishing such things as wind farms – thereby giving them a double payment for avoided emissions).

“The ETS has been applied piecemeal to different sectors, and our largest single emitter, agriculture, does not have to account for its emissions at all.

“Our climate change policies have failed spectacularly and, given the mistakes outlined above, unsurprisingly.

“It is long past time for the government to fix the ETS by adopting rational, morally defensible policies to address climate change. These include:

“It seems highly likely that New Zealand will be signing the Paris Agreement at the United Nations headquarters in New York on 22nd April (Earth Day). If so, that will commit us to meet our current greenhouse gas emissions reduction target of 30% below 2005 levels by 2030 as a minimum.

“France, as the on-going President of the climate change negotiations until Morocco takes over in December 2016, is encouraging all countries to be much more ambitious in setting their targets because, at present, the total of emissions reduction pledges for all countries falls well short of the level needed to keep the global temperature rise below 2oC as internationally agreed some years ago. Meeting the much more challenging 1.5oC was also negotiated in Paris by our South Pacific Island neighbours and others. It is in the Agreement but will require far more stringent mitigation targets by all countries to meet it.

“New Zealand  can meet its target through a combination of buying carbon credits off-shore (though who from and for how much is unknown); encouraging more forest plantings or native forest regeneration that would remove carbon dioxide from the atmosphere as the trees grow; or taking domestic emission reductions across the energy supply, transport, buildings, industry and agriculture sectors where feasible. The last option will often result in co-benefits that will need to be valued when assessing the relative mitigation costs.

“The Royal Society of New Zealand is due to launch a report on 27th April titled “Transition to a Low-Carbon Economy for New Zealand” that will confirm there is good potential for many domestic mitigation options available over the next few decades, some cost-effective now and some that will be in the future when the carbon price rises above the current $13 / tonne carbon dioxide equivalent.

“So given that our track record is far from perfect by off-setting a large share of our emissions by buying cheap and unworthy credits as clearly outlined in the Morgan Foundation report, greater leadership is now required.  Encouraging businesses, cities, communities and households to reduce their carbon footprints in everyday activities may now be the preferable option to take.”

Catherine Leining, Policy Fellow at Motu Economic and Public Policy Research, addressed these issues on the Motu blog in 2015, which she offers as comment on the current report. She wrote:

“Fundamentally, [Joint Implementation projects creating questionable carbon credits] fell victim to low mitigation ambition and short-term self-interest by both sellers and buyers. The problem wasn’t the mechanism of trading, but what was being traded.

“The bottom line for the climate is that achieving the two-degree global goal requires committing to ambitious mitigation pathways that will shift the world toward a zero-net emission economy. Mobilising financing at unprecedented speed and scale to support mitigation where it is most cost-effective will require leveraging the full power of markets operating at the scale of sectors.

“Emissions trading can be an effective part – although certainly not all – of the mitigation solution, but only if it is implemented within an enabling framework of ambitious targets, transparent reporting, and international accountability.”