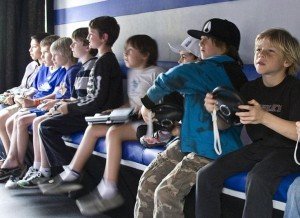 Time spent playing violent video games may be linked to aggressive thoughts and behavior in children, according to a new study.

The research, published in the journal JAMA Pediatrics followed 3000 children in Singapore over three years.

It found that children who reported frequent violent video game play were more likely to have aggressive thoughts, and to believe that hitting is acceptable in real life, than children who don’t play them.

The study also found that responses were similar among girls and boys, and that parental involvement was not likely to have an impact on outcomes.

The UK Science Media Centre rounded up the following expert reaction to the study.

“This study shows an association, of unclear magnitude, of violent video game-playing with subsequent aggressive behaviour. It does not, and cannot, show that the association is causal.  The authors assume from the start that violent game play is what is influencing aggressive thoughts – the possibility that kids with latent aggressive tendencies tend to play violent video games does not seem to have been considered.”

“The influence of electronic gaming on young people is an important and hotly debated topic. This study presents longitudinal data collected about the gaming habits of Singaporean youth and draws strong conclusions about the effects of violent game play. Unfortunately the paper is weakened by a number of methodological and analytic shortcomings that make it hard to understand its value to an active research area. I’ll note two.

“First, it is difficult to determine the magnitude of the links relating violent game play, measured at the start of the study, to self-reported aggressive behaviour, measured three years later. Working backwards from some of the statistics present in the figures and tables it appears that violent game play accounts for a very small amount of variability in self-reported aggressive behaviour. Said differently, imagine a Venn Diagram. The circle on the left represents all the variability observed for violent game play and the one on the right represents all of the variability observed in self-reported aggression: This research suggests that the overlap between these circles is in the neighbourhood of half of one percent. This is a very small share of variance for social science research and the paper does not discuss this in a satisfactory way that contextualises the research more broadly.

“First, consider what the authors actually studied: the self-reported playing of video games by Singaporean children in certain schools, and their answers to questions about aggression – questions regarding hypothetical scenarios and their past behaviour, all self-reported. Second, the statement that more than 90% of children play video games is a) in reference to studies about American, rather than Singaporean, youth; and b) does not contain information about the violence level of the games, or about the frequency with which they are played.