In the latest move to address declining water quality in rivers and lakes, the Government has proposed a new set of national ‘bottom lines’ for freshwater ecosystem and human health values. 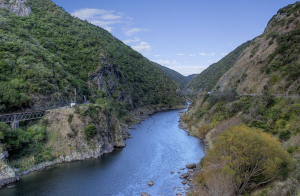 The proposal follows extensive discussion with scientific panels and other stakeholders. A consultation period will run between now and February 2014. Read the full release here.

The Science Media Centre collected the following expert commentary on the discussion document released Thursday. A media statement from the  New Zealand Freshwater Sciences Society is also available below.

Feel free to use these quotes directly or contact us on 04 499 5476 or smc@sciencemediacentre.co.nz for further assistance. Further comments will be added to the Science Media Centre website.

“It is very good to see a major step forward on the road to effective implementation of the National Policy Statement [NPS] for Freshwater Management. It was well recognised when the NPS was released in 2011 that numerical limits for individual water parameters would be needed to protect water bodies for the values identified. We now have the first of these limits being proposed. The initial focus is on those parameters which have proved the most difficult to control through the use of existing recommended water quality guidelines. The proposed limits appear sensible. The inclusion of compulsory values for ecosystem health and secondary human contact for most water bodies is essential to achieve the aims of the NPS, but it will be equally important to ensure that there are very few exceptions made to this rule.

“I do have some reservations. It seems unlikely that the approach taken for dissolved oxygen control (in rivers) will be effective as this ‘attribute’ varies over the course of each day, typically reaching its lowest levels at night. Significant oxygen stress will be missed by the proposed approach.

“I am surprised by the omission of limits for nitrogen and phosphorous nutrients in rivers to prevent nuisance algae growth. This is perhaps intended to be addressed through the limit proposed for chlorophyll-a, but this is targeting the result not the cause of the problem. Also, there appears to be no intention to adopt limits for trace toxic contaminants (e.g., heavy metals, arsenic and organic contaminants) for ecosystem health. Diffuse sources of these types of contaminants have a significant impact on the ecology of waterways in urbanized, mineralised and geothermal catchments, and are not currently effectively controlled.

“Finally, a plea for simplification. There is an alarming trend towards complexity in the current NPS amendment. Relatively simple concepts are being made more obscure through the use of unfamiliar terminology. Referring to “water management units” in place of water bodies or catchments, for example, does nothing to make this process more transparent to the communities involved in the decision-making processes.

“After being involved in a science panel making recommendations on the National Objectives Framework, I’m very pleased to see the release of this report.

“The report is a culmination of many people’s efforts over the last two years and represents an important step in the plan for improved freshwater management that was devised by the Land and Water Forum.

“I’m particularly pleased to see recognition of the strong connection between what happens on the land and potential effects on the coastal environment.  There was a risk that these links would fall through the gap between the freshwater and coastal policy statements.

“The proposed National Objectives Framework is still incomplete, but I hope to see additional attributes being included in the framework in the near future as additional scientific information becomes available.

“The proposed ‘bottom lines’ of the listed variables are set near the appropriate levels for what they are intended to do, but any appropriate measure to protect rivers is completely absent. In the long to short term this is going to allow greater degradation of our rivers.

“To protect our rivers (within the limits of reasonable economic development) there should have been limits for instream nitrogen concentration (not its toxicity effect but the ecosystem health effect), instream phosphorus concentration (why do we have nitrogen and phosphorus limits for lakes but not rivers?), MCI (biological invertebrate health measure), IBI (fish health measure) and deposited sediment. These variables we have known about for at least 20 years as important for assessing river health or that can influence river health and for most of which we have well established limits already.

“Some of the numbers presented are an example of an “evidence-based policy”. But there is extensive evidence of the factors listed above (nitrogen limits, phosphorus limits, MCI (invertebrates), IBI (fish), deposited sediment) being important for environmental bottom lines in rivers but where are they in the mix?

“I am not sure which scientists have been involved (I have not) but I would be surprised if many freshwater scientists in New Zealand would suggest we can protect the environmental bottom line of rivers without considering the parameters listed above.

“Where to next? More degradation of rivers in the name of economic development.”

Why were the bottom lines for human health set for wading and boating, not swimming?

“Because there are already Microbiological Water Quality Guidelines for freshwater and coastal water, issued jointly by the Ministry for the Environment and the Ministry of Health, in 2003”

Why have E. coli and cyanobacteria been singled out as human health indicators, and why have they been set at the given levels?

“E. coli has been used as a human health indicator (with respect to pathogens) primarily because a nationwide microbiological study some years ago identified that bacterium as a suitable surrogate for the pathogen of interest (Campylobacter). I can’t comment on cyanobacteria.”

Why rely on annual medians rather than peak measurements? Will this keep people safe enough in the lowest performing regions?

“I understand that medians were used to facilitate efficient assessment of compliance, given that the sampling effort for secondary contact waters is typically lower than for primary contact (swimming) waters (typically monthly versus weekly).”

Is this a good example of an “evidence-based policy”? Have scientists’ contributions been listened to?

Are the proposed ‘bottom lines’ set at appropriate levels? How much of a difference are they likely to make in the short and long term?

“No, they are not because they are not measuring anything meaningful.  For example; you can’t measure something as variable as dissolved oxygen in a one-off sample.  And setting N levels based on toxicity is pointless – when ecosystem level changes like periphyton blooms happen at way lower levels, it’s too late by the time they reach toxicity.”

What is missing from the proposal?

“Biological monitoring is missing. “One-off sampling of oxygen or nutrients is pointless when they are so variable, so the biological communities are the only way to go. See the rest of the OECD for examples of how biomonitoring is emphasised.”

In your view, what is the potential impact of offering exceptions for significant infrastructure that has a “significant economic benefit”?

“This seems to be an out clause, so anything will go. It’s a way of weakening provisions that might protect the environment.  The key point is: who decides what is significant economic benefit? Does the analysis of ‘benefit’ include the costs to society, the environment, the future chances for life-supporting capacity?”

Is this a good example of “evidence-based policy”? Have scientists’ contributions been listened to?

“I’m not sure who was listened to — I wasn’t. I would be interested to hear a freshwater scientist detail how these ‘bottom lines’ could protect freshwater ecosystem health.”

“Freshwater health will continue to decline, until we look at the drivers – mainly farming intensification.”

The New Zealand Freshwater Sciences Society is a professional body that supports scientifically-informed decision making for freshwater management in NZ.  The Society welcomes the changes to the 2011 National Policy Statement for Freshwater Management (NPS-FM) as part of a limits-based approach for freshwater management.  This approach was recommended by the Land & Water Forum and is widely recognised within the Society as an essential mechanism to address the effects of diffuse nutrient pollution from increasingly intensivety of agricultural land use. Another important attribute of the changes is the way in which scientists, including many from the Society, have been engaged in contributing towards the numericvalues of  objectiveslimits forof variables such as levels of nitrogen, phosphorus and algae.

Whilst limits for protecting ecosystem health of lakes appear to be appropriate to many lakes, those for rivers and streams are deficient and there is nothing yet in place for wetlands orand estuaries.  As expected, a small proportion of mostly lowland lakes do not conform to the bottom-line levels that have been set for nutrients and algae (including blue-green algae), and actions will be required by councils and the community to restore water quality in these systems.  The Society will needs to be further engaged to assist both with objectivelimit-setting for wetland and estuary ecosystems as well as by councils to provide solutions and timelines for achieving restoration targets.

For rivers, the Society has concerns about the fact that the bottom line for nutrients is set only at the toxicity limit for nitrogen.  Only one river in NZ violates the toxicity limit, yet both scientists and the community know that there are already serious issues from too many nutrients being lost from the landscape and causing progressive decline in river and estuarine health across the country.  Scientists must play a stronger role in recommendingadvocating for and setting better measures to protect river health.  For example, biological invertebrate health measures are a well-recognised metric of river/stream health and have been in use for this purpose for many years but are conspicuously absent from the frameworklimits.  Again, scientists in the Society and more widely should be re-engaged to help further with limit setting for river health. The government must maintain a commitment to rapidly filling gaps in the current framework for managing rivers in particular.

Finally, the Society has some concerns about proposed exceptions being made to bottom lines for some waterbodies.  These cases must be assessed carefully and should not be used to promote short-term economic gains that damage ecosystem services derived from fresh water.  New Zealand is already paying a high price to address the legacies of past environmental decision-making and cannot afford trade-offs that risk our international credibility in environmental guardianship.

The NZ Freshwater Sciences Society will hold a meeting with its members in December 2013 to discuss the amended National Policy Statement and providing a submission to both refine the bottom lines and move forward with further limit setting.