The Cook Islands seabed authority has opened up 120,000 square kilometres of seabed for exploratory surveying of minerals. 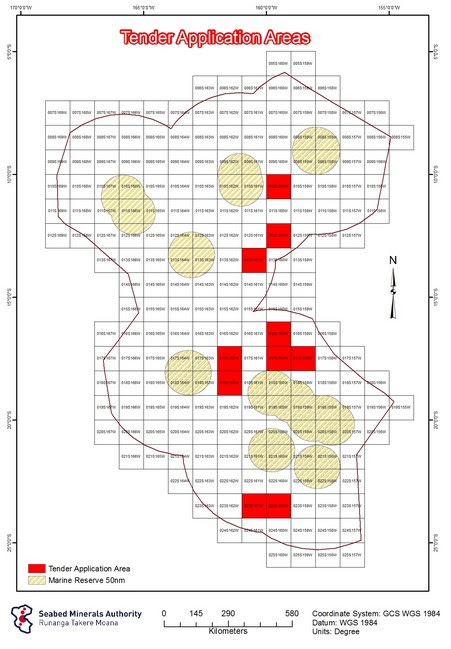 Over the the next three months the island nation will be receiving tenders from interested parties seeking to undertake exploratory surveying in their Exclusive Economic Zone.

Cook Islands Finance Minister Mark Brown, speaking to Radio New Zealand’s Dateline Pacific, said estimates placed the value of the seabed minerals to be in the range of billions of dollars.

“The big concern with this sort of mining (i.e. manganese nodules on the sea floor) is that we really don’t know very much about the biological community or perhaps communities living in this environment.

“Large scale mining activities have the potential to change, over very long periods of time, biological communities that are part of the marine environment. The precautionary principle indicates that until we have a much better understanding of the impact of mining on such communities then mining should not proceed, or should only proceed at small scales. As is so often the case, we need more scientific data to be able to judge the risks before mining activity commences.”

Prof Barry Barton, Professor of Law at the University of Waikato, comments:

“The Cook Islands Government have done some good work here. We have to remember that the technology here is new, the economic resources are little known, and the environment is little known too.

“There could be good progress made in getting important resource and environmental information in place, not only for specific projects but for a more general contribution of the Cook Islands marine areas.

“New Zealand’s experience shows that developing sound environmental science is important, and not always easy. Good baseline information should be an early priority.”

“Prospectors are interested in ferromanganese nodules – metal-rich concretions that form by direct precipitation from seawater. They occur in vast quantities in many parts of the deep ocean, and are sought for their metal content (particularly copper, nickel and cobalt).”

“They are likely to use mainly non-invasive techniques such as sonar and photography to assess surface density and either dredging or piston coring to collect samples for analysis.

“There is no need for seismic or other deeply-penetrating geophysical techniques since the deposits occur on, rather than beneath, the seafloor.”

“The technology for hoovering or scooping up the nodules from the seabed is available and should pose no particular problems.  The difficult and expensive part of the operation is the  mineral processing – extracting the metals of interest from what is in effect a ‘chemical soup’.

“New Zealand also has large deposits (though not as rich in strategic metals as the Cook Island nodules) east of the Campbell Plateau. These occur in nearly 5km water depth in much more difficult oceanic conditions, which would make such an enterprise there considerably more challenging.”