The Ministry of Civil Defence and Emergency Management today released a review of tsunami hazard in New Zealand, the first major update of the science since 2005, and encompassing the whole of New Zealand’s coastline for the first time. 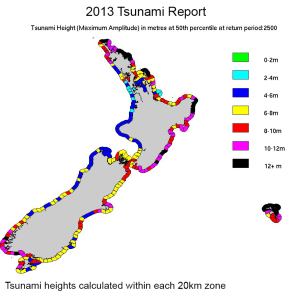 The review shows the maximum possible size of some local and regional tsunami is bigger than previously understood, though tsunami are no more likely.  This increases the tsunami hazard for some areas of the country, notably east-facing parts of the North Island and west-facing parts of the South Island.

The review considers “return periods” of up to 2,500 years, and defines the biggest tsunami that can likely be expected within that time frame.

The review incorporates research on the 2004 Indian Ocean, 2009 South Pacific, and 2011 Tohoku (Japan) tsunamis. All were produced by earthquakes substantially larger than had been considered likely at those locations. New scientific models that reflect this increased uncertainty about the maximum possible size of earthquakes at tectonic plate boundaries have been used to underpin the review.

The Science Media Centre hosted an online briefing with two authors of the review to explain the science behind the update.

Summary of the three key points arising from the review

– The probability of a tsunami has not changed but the maximum possible size of a tsunami in some areas has increased.

– A large tsunami generated very close to New Zealand would arrive before an official warning could be issued or sirens activated. People must know that if they are at the coast and feel a strong earthquake (it is hard to stand up) or a weak earthquake that lasts for a minute or more, then get to high ground or go inland. Do not wait for an official warning.

– Councils are responsible for warning communities and developing local plans.

The main areas where tsunami caused by local and regional sources pose a greater hazard than previously understood include:

– the coasts of Northland, the north-west part of the Auckland region, Great Barrier Island, the Coromandel Peninsula, and the Bay of Plenty;

– the East Cape of the North Island, and parts of the Wairarapa coast

Resulting from the review, the Ministry of Civil Defence and Emergency Management will be:

– Encouraging councils and the 16 regional CDEM Groups to reinforce the national public messages with more specific local and regional information.

– In October and November, with GNS Science, holding regional seminars for CDEM Groups and other response agencies. The seminars will be a chance to clarify the review and discuss matters related to tsunami warnings, including public preparedness and alerting.