Fruit and vegetable consumption is correlated with changes in skin redness and yellowness. 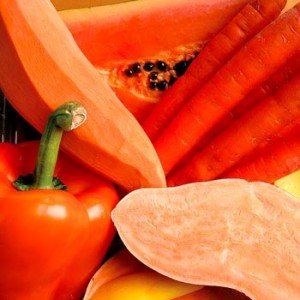 In a new study published in the journal PLoS ONE,   Scottish researchers investigated whether the amount of fruit and vegetables eaten affects skin color. They found that skin redness and yellowness increased with increasing fruit and vegetable consumption over a period of 6 weeks and that these changes in skin color were correlated with increased attractiveness, suggesting that the skin color changes reflect improved health.

“It has been well established that the carotenoids present in some fruits and vegetables are involved in skin colouration, and if consumed in excessive quantities can result in obvious yellow/orange colouring of the skin called carotenemia. This occurs because the carotenoids present in foods such as carrots, tomatoes and mangoes can be deposited in the fats of the outer layer of skin cells, often most obviously on the palms or soles.

“There is less data in regards to mild colouration of the skin and its relation to average fruit and vegetable intakes. This study attempts to quantify how much of an increase in fruit and vegetable intake is correlated to a change in skin colouration, and links this to images from another study to try to determine if an increase in the yellow/red colouration of the skin is perceived as healthier and more attractive. However what this study doesn’t take into account is the how the foods were prepared, as the availability of these phytonutrients to the body varies substantially depending on whether the vegetable for example has been cooked, or what it is served with. It is also not possible from this study to generalise the findings to state that there is a linear change in skin colouration with increasing intake, as absorption and bioavailability play a role in the uptake of nutrients such as carotenoids and lycopene, which result in their uptake not being a simple linear response to increased intake.

“It is also not known from this study if age has an impact on phytonutrient uptake or the degree of related skin colouration, as all of the subjects were young students (18-25yrs) and therefore the study would need to be repeated in an older population in order to see if they respond similarly before any messages can be extended to outside the tested population.

“With the vast majority of the population not consuming the recommended 5-a-day of fruits and vegetables, this could be another way of encouraging people through our own innate vanity to increase fruit and vegetable intakes. After all fruits and vegetables contain a wide range of nutrients that are good for not just our complexion, but for our overall health.”

“There are a couple of design issues with this study and also the interpretation of dietary implications.
“Study issues:

1. First of all the study looked predominantly at caucasian skin – inevitable I guess given the way in which skin colour was assessed, but not necessarily useful to extrapolate to our multicultural population.
2. Although excluding heavy sunbathers, all skin sites measured – bar the thenar eminence – were on areas naturally exposed to sunlight. However, I guess that given the subjects were at St Andrews university in Fife, it makes the chance of decent sun exposure sufficient to alter skin colour unlikely – but they don’t document changes in UV light index from the Met office for the duration of the study – particularly in the third month (June) where incidental UV exposure (e.g. walking to test lab from university residences during the mid-day hours) could be of sufficient wavelength to alter skin colour towards the end of the study period. In my opinion, a major oversight.

4. It is already well known that carotenes can deposit and contribute to body fat colour, and in fact form the basis of some self-tanning pills, providing sufficient beta carotene to stain body fat and influence skin colour where fat is present subcutaneously.

5. Like many studies researching nutrition, the simple assumption is made that consuming more of a product directly causes increased levels in the body, which is untrue. In this study, the inference is made that the more fruits and vegetables you eat – particularly those rich in carotene/ carotenoids – the greater the change in skin colour and potential protection from oxidative damage.

6. The uptake of food components like carotenes/carotenoids is not linear. Their absorption is influenced not only by the amount present in a particular food, but also how that food is prepared and cooked. For example, in this study, lycopene seemed to be absorbed well when compared to other carotenes. However, the lycopene present in raw tomatoes is poorly absorbed, but from tinned tomatoes is spectacularly available – the result of the heat treatment applied to the tomato during the canning process. Lycopene is poorly absorbed from low fat meals (e.g. a tomato salad) but much better so when exactly the same salad is served with an oil dressing. We know that lycopene absorption is aided by the presence of fat or oil in the meal, so adding a full fat salad dressing, or having tomatoes as part of a spaghetti bolognaise with meat and fat/oil generates much better uptake of lycopene from an amount of tomato better than eating a lone tomato by itself.

The principal of different bio-availability of nutrients in food was not addressed at all by this study, which seemed to assume that a measured amount in food would be proportional to uptake – it isn’t. It may also explain why they managed to measure such a wide spread of results.

We know that the more fruit and veg you eat, the more benefit you get for your health in general. Carotenes are just one class of important phytochemicals found in yellow, orange and green veg (where the carotenes are masked by the green chlorophyll, until you leave them in the fridge too long and the chlorophyll breaks down, revealing the yellow carotenoids present but hidden from usual view), and it appears from this study that the greater your intake, the more attractive your skin tone appears to fickle university students where first impressions as to superficial appearance may only be skin deep. For the rest of us post-university people, it’s another potential reason to carry on eating your greens – and red/orange/yellow veggies as well. The grown up way of serving them cooked, or as part of an overall meal along with other foods, boosts bio-availability of these useful phytochemicals, which may contribute to overall health – as well as beauty!