A New Zealand researcher who showed pigeons can be as good as rhesus monkeys at sorting images of shapes into numerical order has made news around the world, with reports of of the former racing pigeons in Dunedin popping up in the New York Times,  Scientific American and a swathe of TV channels. 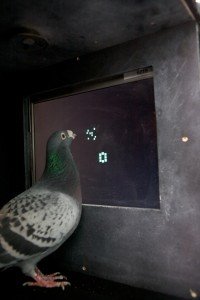 Though the ability to order things numerically is technically not the kind of complex counting  that  requires specific tags for each number, Otago University psychologist  Damian Scarf successfully tested his pigeons with the same number-recognition tasks completed by rhesus moneys 15 years ago to show the pigeons can put images in order based on the number of objects pictured in each.

Psychologist Dr Damian Scarf told the SMC that he now plans to test kea, which have been claimed to have some of the intelligence of a six-year old child. “I am currently setting up a project that will utilise the 2 keas and other parrot species housed at the Dunedin Botanic Garden aviary,” Dr Scarf said in an email. Though some media  disparagingly referred to the pigeons as “rats with wings”, Dr Scarf told the SMC: “They really are the perfect subjects and work diligently for their wheat reward.”

Not that his feathered friends made life easy for him, he said on his website: “I actually started with chickens. I was trying to compare them with some previous work on how pigeons learned to use touch screens to access food. But it was hopeless. Chickens are totally impulsive, they just peck at anything.” That was a year and a half gone.

“I thought we needed a smarter bird. So I tried again with magpies from a farm. After five months of spending 12 hour days with them, grinding livers to feed them and constantly smelling like a meat processing plant, I never got them to do anything. They just wouldn’t habituate to a lab environment.”

The pigeons rivaled the rhesus monkeys previously on numerical order — using the same tests —  Dr Scarf and his colleagues reported today in the journal Science.

The results “suggest that despite completely different brain organization and hundreds of millions of years of evolutionary divergence, pigeons and monkeys solve this problem in a similar way,” a coauthor of the original study of numerical order in monkeys, Elizabeth Brannon of Duke University, told the Science News website. Pigeons were trained to attempt Dr Brannon’s numerical-order test — which baboons and lemurs as well as some other monkeys have passed — on computer screens displaying sets of three images, each with one, two or three shapes. The shapes varied so that a bird couldn’t get the number order right just by pecking at increasing surface area: they were rewarded  for pecking in one-shape, two-shapes, three-shapes order.

The toughest test came when a pigeon had to peck pairs of unfamiliar images in ascending numerical order — they were correct 74 percent of the time matching the monkeys. Seeing such similarity on the same task “helps us with the puzzle of identifying the origins of numerical ability,” said Dr Scarf.

The research has cause quite a flutter among overseas media outlets:

New York Times: How Smart Is This Bird? Let It Count the Ways

CBC News: Pigeons’ math skills are as good as monkeys’

MSNBC: You do the math – because that pigeon over there can

LiveScience: Are Pigeons as Smart as Monkeys?

The Otago research has also gained recognition closer to home:

Radio New Zealand: Rats with wings may just be flying Einsteins (listen below)