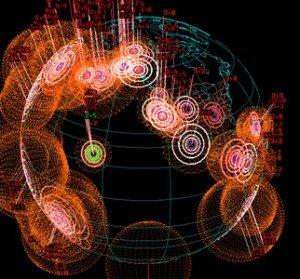 Following the recent spate of seismic activity in the Pacific, our colleagues at the Japanense Science Media Centre contacted one of the paper authors, Tom Parsons for comment. His response is provided below. Feel free to use these quotes in your stories. For further information or to contact a local expert, please contact the NZ SMC.

Q: What did you think about the March 11 Tohoku earthquake?

When I first got notification about the Tohoku earthquake, the reported magnitude was M=7.9 at 14 km depth. I was first concerned about a tsunami. I found a live Japanese TV feed on the web and was horrified to see the tsunami hit in real time while simultaneously seeing the magnitude be revised upward repeatedly towards M=9.

Q: In terms of your latest paper, did you think there was a chance another earthquake would hit Japan?

I was also mindful of the earthquake triggering issue, so I was monitoring the global seismicity rates. This event seems consistent with prior findings that there are many aftershocks regionally, but no obvious evidence of a global effect.

The concern looking forward is indeed whether more damaging earthquakes might follow, and this is what many researchers around the world are trying to quantify. Certainly we know that many aftershocks will happen and have happened. The majority of these will be small, and their rate decreases with each passing day. Nonetheless, continued preparedness is certainly the wise choice.

Q: Another large earthquake hit Burma on March 24. Do you think this could be linked to the earthquake in Japan?

I can’t say it isn’t linked; however this would require it following a physical process that we do not understand because of the long distance and time between the earthquakes. It seems to be the only large earthquake that has happened outside of the regional aftershock zone of the 11 March event. We would thus suggest that it is more likely a coincidence, based on our study of the last 30 years worth of earthquakes.