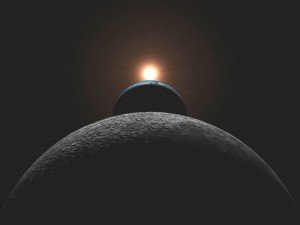 Recent media coverage has focused attention on unfounded claims that earthquakes can be predicted by various methods, some involving the moon’s influence on tidal forces which may “trigger” large quakes on already stressed fault lines.

Scientists, including seismologists, geophysicists and psychologists, contacted the Science Media Centre today with comments in response to the publicity these claims have been receiving and the widespread public reaction they are generating.

‘Earthquakes and the moon: should we worry?’ – An excerpt:

“No one has predicted the recent earthquakes in Canterbury. Vague quotes about dates of ‘increased’ activity plus or minus several days, without magnitudes, locations, and exact times do not constitute prediction. … [This] is opportunistic and meaningless self promotion during a time of national crisis.

… “Consider implementation of this ‘predictive’ strategy. Should we evacuate an area every time the moon is on its closest approach, is full, or new, or is moving rapidly? Imagine the fear and frustration of such an approach, particularly given the unspecified times, locations, and magnitudes of the supposed ‘imminent’ events. Without a basic understanding of how faults generate earthquakes, where the faults are, at what stage they are at in the seismic cycle, and how they have been affected by prior activity, where should we evacuate and where should we go to? This would require several evacuations a month of ‘unspecified areas’ to other ‘unspecified areas’. This is ludicrous.

“Since humans first looked into the sky and felt the effects of earthquakes, they have wondered if the moon and planets are in some way responsible for major earthquakes. As early as 1897, scientists began to pose hypotheses about moon-earth earthquake connections and test them in honest and rigorous way. After all, the moon still gets earthquakes in the absence of plate tectonics, so perhaps there is some validity to this claim. While some astrologers may feel isolated from the scienitific community, this shows a true lack of appreciation for all of those dedicating significant effort to this issue.

“Many of these findings from studies comparing earthquake catalogues to tides have been published in high quality journals such as Science (e.g., Cochran et al., 2004) and some scientists have argued based on statistical data from global earthquakes for an influence of tides on earthquake activity under certain circumstances, such as beneath the oceans and within active volcanoes. Some scientists have even argued for a small correlation (perhaps an increased earthquake likelihood of 0.5-1%) between smaller, shallower continental earthquakes and ‘solid earth tides’ (changes in the shape of our planet due to the gravitational pull of the moon) – (see this link). This is peer-reviewed but controversial research; it does not make it so, but it has undergone scrutiny and will continue to do so. This is the scientific process.

“Typical earthquake-induced stress changes are about 100 to 1000 times greater than those induced by the tides. Earthquake induced stress increases are also constant, that it until the breaking of the rock alleviates that stress, while tidal stress changes occur in brief intervals related to the moon’s elliptical orbit about the earth. There is significant evidence to suggest that the tidal oscillations are too brief and too weak to trigger major earthquakes. So the redistribution of stress related to our 7.1 mainshock and resultant aftershocks is undoubtedly the dominant control on our aftershock sequence, not the moon or planetary alignment.

“I won’t be going anywhere in late March, but I will always be willing to engage in scientific discussion and debate if it appears in an open and honest format. In the midst of a crisis, however, I feel quite strongly that the time is not yet right.”

“Validation of an earthquake prediction methodology is a notoriously tricky undertaking.  Unfortunately it is not as simple as taking a single prediction, whatever that may be, and comparing it to what occurred.  It may be that a particular method has some bits of useful information in it, enough that it  may get the prediction correct one out of every five times, or one out of every  100 times, or maybe, one out of every 10,000 times.  For a prediction to be useful it must be understood where in this range the method falls.  If it is  correct 1-in-10,000 times, or is wrong much more often than it is correct, it will be of little help and a random guess will do just as well.

“A significant body of research has been directed at the idea that earthquakes may be predictable based on tidal information.  While some of the studies have  shown that there may be some level of correlation between the occurrence of  earthquakes and tides, the correlation is low enough so that a prediction based on it would be correct only a small proportion of the time and would be wrong  much more often than it is correct.  The method is not useful for precisely predicting the location, magnitude and time of an earthquake.

“Around the globe, centres have been established that fairly and thoroughly test earthquake predictions against future earthquakes.  One of these centres is established in New Zealand and anyone may contribute their predictions.”

“As Mark [Quigley] points out, vague assertions of increased earthquake likelihood are not useful.

“But we should not be too dismissive of earthquake/tidal links in certain circumstances.  (I’m referring to the stresses induced in the solid earth by the tides due to the moon and sun – (anyone who suggests that the planets have an influence is talking nonsense).  As well as the tides induced directly in the solid earth, the ocean tides load the Earth and cause additional stresses, particularly close to coastlines.)

“We are quite happy these days to allow that Coulomb stress changes on the order of 1 bar due to a major earthquake can influence the locations of aftershocks, and can act as a trigger for future earthquakes adjacent to the original quake.  Though I emphasise that we can say nothing about the specific timing of such earthquakes.  Tidal stresses are only an order of magnitude or so lower than this, so it is reasonable to suggest that tidal stresses could have an influence on faults that are already stressed close to their breaking point.

“Many studies were conducted and published in the 1970s and 1980s that looked for a connection between earth tides and earthquakes.  These almost uniformly gave negative results, or results that were perhaps positive but very close to the noise level.

“One could hypothesize that the Earth’s crust in the Canterbury region has been so stressed by the September quake that the tiny stresses induced by the tides could have an influence on the times of aftershock occurrence.  This is a testable hypothesis, as it could be applied to all the aftershocks recorded so far to see if the effect shows up in the timing of those aftershocks.”

“”A simple analysis by Paul Nicholls of aftershock occurrence and the phase and distance of the moon shows that there is no obvious correlation between these parameters and the occurrence of large aftershocks.  Some of the larger aftershocks occur when the moon is further from Earth than average, some when it is closer, and some when it is at about its average distance.  To thoroughly test any link between tides and aftershocks would require a more sophisticated analysis of the tidal forces acting on the Earth.  The forces generating the tides come about 2/3 from the Moon’s gravity and about 1/3 from the Sun’s gravity, so both the Sun and the Moon need to be taken into account for a rigorous test of any correlation.”

Paul Nicholls of the University of Canterbury, creator of the website Christchurchquakemap.co.nz has commented :

“There does not appear to be any clear, obvious correlation between the phase or distance of the moon and any of the quake metrics shown, but they are shown here for you to draw your own conclusions.”

Further analysis of the data above can be found on Sciblogs from David Winter.

“We have something of a pre-disposition to try to find explanations for things that happen, and much more so for bad things, than good. Why? Bad things can kill us, where good things (no matter how good) have a much less final benefit! This is one of the reasons news media tend to focus on bad stuff – because that’s what we want to know about, so we can seek to prevent it in the future. We are really quite well adapted for making connections between apparently unrelated things that might help us avoid getting, in evolutionary terms, eaten. The downside is that sometimes we make the wrong connections, but hey, wouldn’t it be worse to GET eaten than make a fool of yourself crying wolf?

“Of course, there’s not much we can actually do about things that we REALLY don’t have any control over. This makes most people very uncomfortable (and some more than others) so we look for ways to deal with that discomfort. One way to do this is to find ’causes’ that we CAN point to, to explain bad stuff. This is one of the reasons that conspiracy theories develop – the fact that stuff sometimes just happens is less comfortable than being able to point to some shadowy evil conspiracy!

“So, this explains why people try to predict the future (or secure the services of those, ahem, practitioners that purport to). We’ve done it forever, and will continue to do so. It helps us from living with the uncertainty and stress that comes from worrying about when things will happen. Where it can be counterproductive, though, is when the security we get from ‘knowing’ that nothing bad is going to happen prevents us from taking reasonable precautions or makes us complacent.

“My personal opinion? Find comfort where you can get it, BUT… I’d trust science over most sources, and I’d still make sure that I do those things that I CAN control (earthquake proofing those things I can, making sure my earthquake kit is well-stocked, etc.)”

“Ring’s predictions are all about statistics and anyone can predict earthquakes if they don’t get too specific.

“For instance I could predict:

“I’d have higher odds for:

“So predicting earthquakes is easy if you don’t need to be specific about where, when and how big.”

For more information, or to follow up with any of the experts above, please contact the Science Media Centre on 04 499 5676 or smc@sciencemediacentre.co.nz