A military robot sent into the Pike River mine to survey conditions has broken down, mine officials confirmed at a press conference this morning. 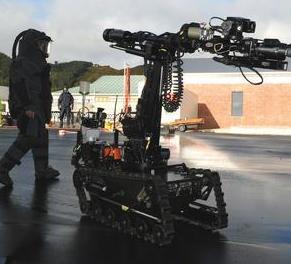 The multi-purpose robot carried four cameras, which it was hoped would return images to engineers of the mine’s interior. Officials said the robot had stalled a short distance into the mine.

The Science Media Centre contacted world leading experts with journalists’ questions about the track record of robots in search and rescue operations carried out in mines – see their comments below.

“It is always a long shot to use any robot for a situation or environment that it’s not designed for– and we are still learning about what is needed for underground mine rescue,” said rescue robot expert Professor Robin Murphy of Texas A&M University.

“The environment is tough — dark, wet, cold so even on a level floor that would be easy for a person to walk on a ‘regular’ robot can quickly short out, get its sensors covered in muck, mechanically seize up, or the operator make a mistake.”

Superintendent Gary Knowles told reporters at the press conference that the military robot will “no longer be used”. More advanced robots would be sought from the United States and Western Australia.

Dr. Robin Murphy: Raytheon Professor of Computer Science and Engineering, Texas A&M University. Dr Murphy is a founder of the fields of rescue robots and human-robot interaction. She has extensive experience in the insertion of ground, air, and sea robots for urban search and rescue (US&R) at 11 disasters, including the 9/11 World Trade Center disaster, Hurricanes Katrina and Charley, and the Crandall Canyon Utah mine collapse.

Have robots been used effectively in the past in the wake of mining cave-ins or explosions to aid in rescuing miners?

SD: “Used in the past, yes. Used effectively, no.”

RM: “There have been no “live saves” with robots, but various robots have been helpful in establishing environmental conditions to help the rescuers decide how to safely proceed or to search places that the rescuers couldn’t go.”

Are there robots specifically designed for the purpose of working in mines or are they generally adapted from other purposes eg: bomb disposal robots?

SD: “Almost always adapted from other purposes, either from military applications, or yes, bomb disposal (i.e. the Northup-Grumman – Andros that Mining Safety and Health Administration (MSHA) uses, and that I saw in the media photos of the Pike River efforts)”

RM: “There is one robot designed specifically for mine rescue- the Inuktun Mine Crawler. It was designed for the Crandall Canyon Utah mine collapse- which was a borehole entry in a mine which was not producing methane.”

What the major limitations of these type of robots? Are they maneuverable enough to get over piles of rubble, damaged equipment etc?

SD: “Mobility is a major issue, largely due to their need to be tethered – connected by wire, since standard wireless technology does not work underground after an accident and ULF (i.e. through-the-earth) wireless does not have sufficient bandwidth to transmit telemetry.

“A key limitation is that since the ventilation systems are shut down or no longer functional after accidents, the potentially explosive gasses that build up in some underground coal mines, as well as the suspended coal in the air, can create additional explosions. Robots are electric and hence through heat or even tiny sparks or static electric build-up, can cause secondary explosions. All electronics that go into underground coal mines must pass an approval process, in the US it is called ‘Intrinsically Safe’, and is assessed by MSHA.

“Therefore, the major technical limitations in brief are:

· Two-way communications from the robot to their controllers.

· Exposure of “unsafe” electronic equipment to a potentially explosive atmosphere.

· Mobility around rubble, equipment, and ventilation curtains (plastic or other types of sheeting used to control the flow of air) that have been ripped down. Also the distance /surface area needed to cover makes tethered machines very limiting.

· Effective human-detection sensors have not been integrated into these machines yet.”

RM: “It depends on which of the 3 types of mine rescue robot deployments. Bomb squad robots appear useful for Surface Entry but too big and heavy for Void and Borehole Entry (see paper). Making a bomb squad robot intrinsically safe so it can operate in methane tends make it bigger and heavier- so that interferes will mobility. Plus the operator interface is often very, very limited- a problem in all robots. The paper has a list of limitations.”

Further comments will be added to the Science Media Centre website.