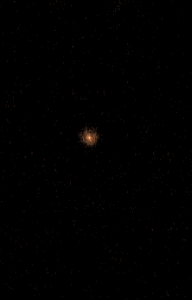 University of Otago physicists have found a way to trap a single atom, using a clever technique to circumvent the quantum uncertainties involved. Their  research, published today in the journal Nature Physics, uses laser cooling techniques and “optical tweezers” to isolate and hold in place one rubidium 85 atom. (The image at right shows an atom caught in the trap.)

The scientists involved say that the ability to trap individual atoms is of vital importance for the pursuit of quantum computing, and that there has already been widespread international interest and research spun off from their discovery.

“This is a very nice demonstration of the manipulation of atomic collisions at the individual event level.  The manipulation is made with a pulse of laser light directed at the atoms while they are colliding. The colliding atoms start out confined in a optical trap. The outcome is that one atom potentially gains enough energy to escape the trap, leaving just one atom behind. Manipulations like this can be used to load (prepare) single atoms in a trap with high reproducibility, a capability required by certain proposed quantum computing schemes.

“It is exciting to see the direct evidence of a controlled collision between two atoms, with clearly resolved outcomes: zero, one, or two atoms trapped after the collision. The three cases can be distinguished by observing how brightly the trap glows when laser light is shone on it after the collision.

“A demonstration like this is a small step in the long march to the dreamed of quantum computer. The march will nevertheless be so very long that it is not really meaningful to put a value on how large a step an advance like this one is; it is not yet even clear which of the many proposed strategies for quantum computing can be successful.

“Experiments like this one are more reasonably assessed on a broader horizon: they to keep our march into the micro-world—towards the controlled manipulation of single atoms and photons (particles of light)—alive.”