Overnight in New York, an independent report was released which recommended a major overhaul of procedures and management of the Intergovernmental Panel on Climate Change. 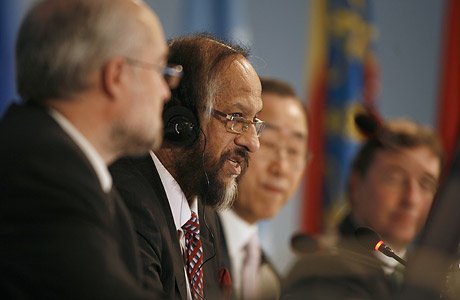 The report, undertaken by a 12 person team from the InterAcademy Council which represents the world’s major science academies, outlines some sweeping changes, such as the installation of an executive committee for the panel to give it stronger leadership, a “rigorous conflict of interest policy” for that leadership and more rigorous review processes to deal with “grey literature” – material from non peer-reviewed sources.

The report can be downloaded here. Videos of the press conferences held to launch the IAC report are available here.

The SMC sought comment from local climate scientists who have contributed to IPCC reports and/or represented New Zealand on the IPCC.

Further comments will be posted on the Science Media Centre website.

“The InterAcademy Council (IAC) has run a detailed review of the process used by the Intergovernmental Panel on Climate Change (IPCC) for assessing scientific understanding and this has produced a number of useful comments that I think most climate scientists will agree with.

“Their report accepts that scientific understanding of climate change is developing rapidly and this means that the process for assessing it for policymakers needs to become more dynamic.

“The IAC recommends a stronger management structure for the IPCC process and more emphasis on a broader communication strategy. That is important, however, it will require a higher level of support from governments, and so government responses to this review are now a key factor. The review has not fully recognised that the IPCC process is controlled by what governments formally agree to in plenary sessions each year, and that there have been instances when this has specifically limited a broader communication strategy.

“The open review process for the drafts of IPCC reports means that authors have to deal with an extremely large number of comments and the IAC has followed a recommendation that I, and probably others, made about the need for some screening of these comments by independent review editors to ensure that the authors can focus on the key questions.

“The IAC puts considerable emphasis on the need to cover uncertainty in this rapidly moving field of science. Their report includes a full copy of the Uncertainty Guidance note that was written for IPCC lead authors by me and two co-authors in 2005. Recommendations for more development in this area match similar comments made by others and steps have already been made to address these in an expert meeting held by the IPCC in July.

“However, those of us who have considered this issue in detail know that there are some fundamental differences in approaches to uncertainty in different scientific disciplines and so because the assessment has to be based on other scientific publications this is not quite as simple as the IAC suggests.

“The key points in this report are that governments should now reform the IPCC management structure and that assessment of the science does need to meet very high standards because climate change has major implications.”

“The IAC review of the processes and procedures of the IPCC contains important recommendations for improving the management of this increasingly complex organisation. It also includes several suggestions to improve aspects of the IPCC’s processes that have already been discussed and in some cases even partially implemented, with various degress of success.

“The most important recommendation in my view is a step-change of the management of the IPCC by creating an Executive Committee, including a senior scientist to act as Executive Director of the Secretariat. Implementing this recommendation would be a significant departure from the current de-centralised model that the IPCC follows, where nearly all scientific work is carried out in the three Working Groups and its Task Force on Greenhouse Gas Inventories. Moving to a more centralised management structure would have clear advantages, such as improved coordination and better ability to respond to comments and criticism in a considered yet efficient way. It would also have some disadvantages though: one of the strengths of the IPCC in its current form lies exactly in its distributed organisation, which is one way of ensuring that its outputs cannot be hijacked by any particular viewpoint or individual. Placing more weight on central management will require considerably greater resources to ensure those management processes are up to expected standards. It will be up to governments to decide whether they are willing to provide such resources, and to consider carefully how the positive outcomes sought by such a change can be achieved without the negative consequences that it could entail.

“Similar considerations apply to suggestions for how to streamline the review process. Increased efficiency would come at the price of placing greater responsibility in the hands of fewer people, that is, the two or three Review Editors assigned to each chapter of the assessment reports. For such a change to work effectively, one would need to ensure that those relatively few people can and will carry out those tasks with the time dedication and expertise that is required to carefully vet thousands of review comments.

“Many of the other recommendations, such as increasing transparency of selection processes and the overall procedures of the IPCC, are well taken and I believe are already receiving attention by those in charge of the current assessment process. Some of the IAC’s minor recommendations, such as staggering of impacts assessments for sectors and regions, seem to me somewhat narrow and short-sighted, since it would increase the risk of internal inconsistencies. Such options have been discussed extensively by government representatives on the IPCC and participating scientists, and the implications of various alternative arrangements would require more careful attention than the IAC appears to have been able to give to those issues. But such options are of comparatively minor importance that hardly affect the main perceived or real challenges concerning the IPCC management.”