Updated 7.30pm: Civil Defence has downgraded its national tsunami warning to an advisory but says water surges and rapid seal level changes could continue for up to 24 hours. 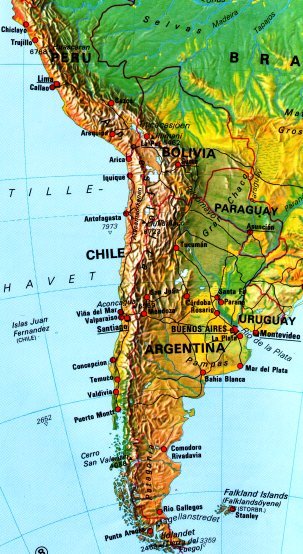 “Wave heights could be larger than what we have currently experienced but within the threat levels and wave height estimates that have been previously forecast,” it said in an update issued at 3pm.

“Strong currents are expected in harbours and restricted waterways. The Chatham Islands and Banks Peninsula could still expect wave heights of between 1 and 3 metres. This represents risks to people in boats and on beaches for coastal communities.”

1. This was a really big earthquake. According to USGS would have been 6th largest equal anywhere in the world since 1900.

2. Notwithstanding that comment, such earthquakes are far from rare in Chile. Here is USGS’s list of M > 8 earthquakes in Chile in order of size:

3. The Ministry of Civil Defence and Emergency management had an early test of their brand new Tsunami Warning plan, which was released on Tuesday! As far as I can see, the management of the event was very good, centrally and in the regions. And thank you to the media, especially RadioNZ for their excellent coverage.”

“I would say that this happened to be a very timely tsunami for us, occurring just after new procedures have been put in place for tsunami alerts. The magnitude 8.8 earthquake in Chile is the largest to occur since the Sumatran Boxing Day earthquake in 2004, which created such a devastating tsunami. This earthquake filled in a region that has few small earthquakes but suffers from large events. It is near the region ruptured during the 1960 Chilean earthquake, which was the largest instrumentally recorded earthquake.

“Luckily the tsunami from this earthquake was much smaller than the 2004 event. Moreover, emergency services learned lessons from the previous earthquake and loss of life was much less.

“However, there was still tremendous damage in Chile due to the earthquake itself, and it is important to remember that people living in cities in earthquake prone areas such as the Pacific rim need to be vigilant and to be prepared for disaster to strike. There is a common saying in seismology, that “earthquakes don’t kill people, buildings do”. In particular, building codes need to be adopted and inforced to keep their inhabitants safe. Residents can also do their part by keeping informed and keeping emergency supplies of water and food, and having emergency plans in place.”

“The full consequences of the massive Chilean earthquake are still emerging. But many lives have been lost and livelihoods disrupted, especially for communities in the vicinity of the epicentre.

“The Chilean earthquake and recent Haitian earthquake underscore a vital lesson that must be heeded in New Zealand and other localities prone to earthquakes:

“Disaster risk is a function of the physical threat (eg. the likelihood and magnitude of an earthquake) and social vulnerability. A hazard only turns into a disaster when the affected population is unable to cope with the ‘physical’ event. Socially vulnerable populations – people who may be poor and marginalised – are especially at risk .

“Therefore, in addition to building vitally important pre-event preparedness and response capacity, more attention needs to be focused on reducing the social vulnerability of populations facing natural hazard risks. There is little that can be done to prevent an earthquake occuring. But much can and needs to be done to reduce social vulnerability.

“Disaster risk reduction is therefore chiefly a matter of reducing social vulnerability and must be integrated more effectively into wider efforts to build sustainable community development.

From our colleagues at the AusSMC:

Associate Professor Dale Dominey-Howes is the Co-Director of the Australian Tsunami Research Centre and Natural Hazards Research Laboratory in the School of Biological, Earth and Environmental Science at the University of New South Wales. He is also the Vice Chairman of the Commission on Hazard and Risk for the International Geographical Union. He comments:

“This is the largest earthquake to affect the Pacific ‘Ring of Fire’ region in many years and it has generated a tsunami that has/will travel across the entire Pacific Ocean (a trans-Pacific event).

“The tsunami represent some threat to coastal waters on the east coast of Australia. Whilst large damaging waves are not expected, strong currents and modest waves at the coast could be experienced at some locations. The Australian Tsunami Warning System was activated and has clearly worked well. Individual State Emergency Service tsunami disaster plans have also been activated. However, it is of some concern that television pictures are still showing people swimming at Sydney beaches during the period when the tsunami is forecast to arrive.

“It is clear that either the warning message has failed to reach some people, or that individuals do not understand or appreciate the significance of the warning. This means further work should occur to raise community awareness of the danger posed by tsunamis.”

GNS Science is also issuing updates through Geonet and has a useful backgrounder on tsunamis here.

Authoritative info about the earthquake is available from the USGS event page.

Victoria University’s Dr John Townend has put together a graphical presentation on the Chilean earthquake which can be viewed here. John Townsend is available for comment today.Contact the SMC for details.

The tsunami reaches New Zealand just days after Civil Defence updated its tsunami risk assessment which includes an analysis of potential tsunamis originating from South America. The report can be downloaded here.

“The magnitude 8.8 earthquake that occurred off the coast of Chile resulted from the oceanic Nazca plate being thrust under the South American plate. Since the main shock, there have been numerous large aftershocks with magnitudes greater than 6. Historical seismicity suggests that continued aftershock activity could include events with magnitudes equal to or greater than 7. The earthquake occurred in a region of known stress accumulation between the hypocentres of the great (M 9.5) earthquake of 1960 and the 1922 (M 8.5) earthquake.

“The earthquake generated a tsunami that propagated west-northwestward across the Pacific Ocean. The largest waves aren’t expected to hit New Zealand. However, numerical simulations of effects of the tsunami on New Zealand predict measurable waves with amplitudes of between 0.2 and 1 metre along much of the eastern coast. Variations in the bathymetry around New Zealand lead to amplification of the tsunami around the Chatham Islands and Bank’s Peninsula, and in these areas scientists have predicted maximum wave amplitudes of between 1 and 3 meters.

“This is  based on numerical modelling and historical comparison with an analogous earthquake on the South American coast in 1877. The historical accounts suggest that the largest waves will in many areas arrive between 6 and 12 hours after the initial arrivals, and this is also supported by the numerical modelling.”

“The tectonic position of this earthquake was similar to that of the June 2009 Fiordland earthquake:  on the interface between a subducting plate (“slab”) and the over-riding plate.  In the Chilean case, the Nazca plate is being subducted beneath the South American plate.  Subduction zones are commonly the sites of the biggest earthquakes, including the 2004 Boxing Day earthquake in Sumatra.  Chile has seen many very large historic earthquakes, most notably the 1960 magnitude 9.5 one, the largest known earthquake of the last two centuries anywhere in the world.”

The comments below were gathered from scientists in Britain by our colelagues at the Science Media Centre in London. We will issue updates from New Zealand experts as soon as possible.

“This is thelargest earthquake to strike central Chile since a magnitude 6.7 earthquake in 2001. The epicenter lies around 200 km northeast of the magnitude 9.5 earthquake that struck Chile in 1960. This was the largest earthquake ever recorded and resulted in a destructive tsunami that killed many thousands of people around the Pacific.

“A 1.3m tsunami wave was observed at Valparaiso, 200km north of the epicentre about 20 minutes after the earthquake. Tsunami waves in the deep ocean travel about the same speed as a jet plane and would take about 15 hours to reach Hawaii and about 20 hours to reach the other side of the Pacific.”

“This morning’s (06:34 [UK time]) magnitude 8.8 earthquake close to the Chilean coast has caused a tsunami that is now radiating away from the epicentre and travelling at several hundred km per hour across the Pacific ocean. The first waves are expected ot Hawaii at 11:19 Hawaii Standard Time but are also travelling along the S America coast and will reach Colombia and Costa Rica after 1300 GMT (see http://www.prh.noaa.gov/ptwc/ ) Some earthquake damage is to be expected ashore in Chile near the town of Concepcion.

“A magnitude 8 quake is a rare event. On average there is only about one of these per year, globally. This one was caised by the floor of the Pacific ocean being pushed below South America. Because the epicentre was under the sea, the sudden jerking of the sea-floor displaced water and triggered a tsumani. The focus of this quake was at a depth of about 34 km – which is relatively shallow (and hence damaging) though not quite so shallow as the magnitude 9.1 quake in the Sunda Trench that caused the 26 Dec 2004 Indian Ocean Tsunami.”

“This earthquake fills in an identified seismic gap – no previous large earthquake had occurred in this area since 1835, when a large earthquake was observed by Charles Darwin. Since then, an estimated 10m of potential displacement has accumulated.” 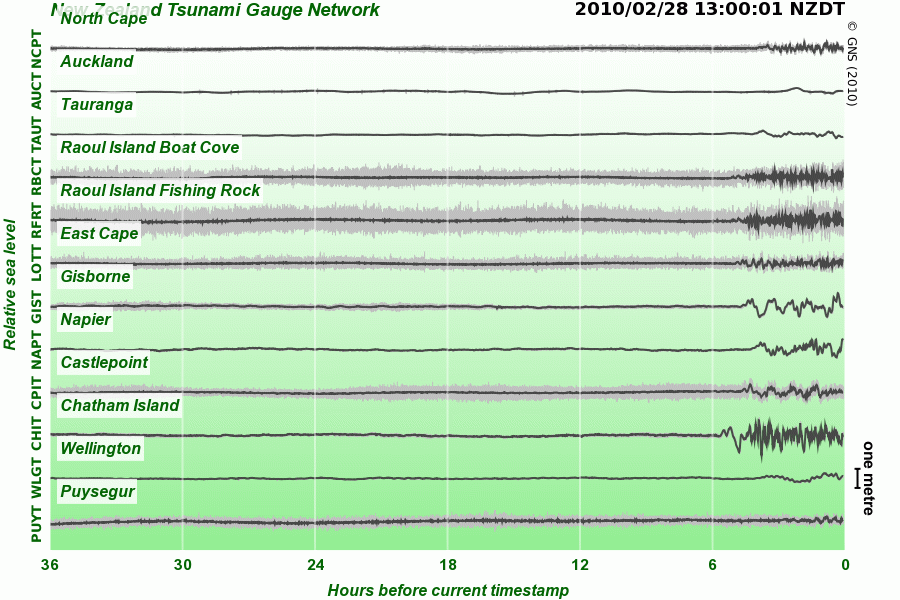