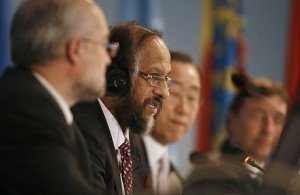 In response to intensifying calls for reform of the International Panel on Climate Change (IPCC), five influential climatologists have stepped forward with their views on what ought to be done.

Their suggestions, in an Opinions article in today’s edition of the journal Nature, range from reaffirming the current structure with an emphasis on best practise, or streamlining the process, to scrapping the IPCC entirely in favour of an International Climate Agency or even a Wikipedia-style repository of climate research.

Alongside these views, Nature features a proposal for the next generation of climate scenarios for projecting future change. This paper, which is the culmination of four years of work by IPCC scientists, is co-authored by Prof Marting Manning of Victoria University of Wellington. More information is available on our website, including a Q & A on the research’s implications and comments gathered by the SMC.

The SMC has asked NZ climate scientists to weigh in with their perspectives on the recent crisis of confidence in climate research, and proposals for reform of the IPCC.

“Recently the IPCC has come under attack for purportedly a shoddy approach to the scientific assessment process associated with the impacts of projected climate change. Consequently there have been calls for disbanding the IPCC and starting over with a new structure. This is a knee jerk reaction to a perception that the IPCC process is “broken” and needs “fixing”.

“Admittedly there has been a slip up in the review process relating to the inclusion in the IPCC fourth assessment of a statement from a non-peer reviewed document on the future of Himalayan glaciers. Importantly though, few involved with the IPCC are denying this was an oversight.

“However when placed in the context of the hundreds of papers cited in the IPCC reports the Himalayan glacier paper and the subsequent vitriol it has generated is a classic case of making a mountain out of a molehill. It is also a clear demonstration of the opportunism practiced by the various communities that conveniently ignore the balanced assessment of the literature on the science of climate change and its associated impacts that is presented in the IPCC reports.

“Rather than “fixing” the IPCC, what is required is some critical reflection by the facilitators of the IPCC process on why “the Himalayan glacier paper” made its way into the WGII report of the Fourth Assessment.

“In my view the IPCC review process exceeds in its level of stringency anything associated with the publication of books and articles in peer-reviewed journals. Unfortunately the scale of damaged exacted on the IPCC is not commensurate with the associated event. However I am confident that the IPCC process is sound, will stand the test of time and importantly continue to deliver balanced and policy relevant treatments of extremely complicated issues related to climate change.”

“Discussions about the future of the IPCC inevitably make me think of the remark by Winston Churchill: “democracy is the worst form of government, except for all the others that have been tried from time to time”. A careful look at possible revisions and alternatives to the IPCC is always useful, but we need to keep in mind that any changes would have to demonstrably improve the outcomes that society needs from this process.

“I assume that we continue to need an independent, authoritative assessment of the scientific evidence and projections of future climate change and its impacts and response options, and one that is taken seriously by governments around the world. This suggests that such a science assessment has to be carried out by leading experts and active researchers regardless of their personal views; the writing process needs to be carried out free from the direct influence of governments or other pressure groups; its authors need to cover a wide range of fields and expertise and also represent a geographical balance to avoid capture by regional interests; and its outputs need to undergo thorough, multiple and open peer-review to ensure a wide range of scientific perspectives can be captured.

“Funny enough, these are all qualities that the IPCC at least aspires to and, in most cases, meets. Any changes to this approach need to demonstrate how they will keep all these positive qualities and reliably improve upon them, rather than just try something different.

“Nonetheless, the IPCC is not a machine but a human enterprise, and as such it would be surprising if it did not make occasional mistakes. The widely quoted erroneous statement about the rates at which Himalayan glaciers are likely to disappear is a very clear and serious mistake. But it is also clear that this mistake could have been avoided if all people involved in the process (which includes the thousands of reviewers that had access to and provided comments on drafts of the report) had meticulously followed the existing guidelines.

“Asking for wholesale revision to the IPCC in the wake of this mistake appears to be throwing out the baby with the bathwater, and dismantling the bath tub as well, when all it needed was a reminder to clean behind the ears.”

“As noted by Tom Stocker [one of the five contributors to the  Nature article], the current structure of the IPCC has all the key elements required: breadth, transparency, independence, and a high level of authority and relevance to policy-makers.

“Errors that have been highlighted recently came about from less than strict adherence to the principle of the IPCC process. We learn from our mistakes, and I am certain that the review process for the 5th Assessment Report will be that much more rigorous because of the slips that have come to light in the AR4.

“However, 99.9% of the AR4 remains valid, and valuable, and it would be foolish to scrap a process that works so well. We can no doubt make better use of the internet (as suggested by John Christy), but the reports of the IPCC must remain authoritative.”

“IPCC reports have been an exhaustive wealth of information, and go through a very thorough review process. However it is time to evolve these. For example, some of the IPCC 4th Assessment Report science was dated for the Copenhagen COP, so I agree with more frequent and shorter updates so that policy decisions can be made on the most recent science. As well, special updates on where there has been significant scientific developments, such as sea level should occur.”

“The comments on recent criticisms of the IPCC assessment of climate change science, by five different scientists in this week’s Nature journal, range from saying that the current process needs to be refined somewhat, to it being trimmed back, or essentially closed down.

“But a key issue seems to be overlooked. The mistakes identified in the report by IPCC Working Group 2 have not propagated into the Summary for Policymakers that becomes approved by governments and then used as the basis for global policy responses to global warming.

“Definitely, the underlying IPCC report should not have mistakes. The current process tries to deal with that by setting up two rounds of open reviews by experts all over the world. All the review comments and the author responses are a matter of public record and the detailed issues now being dug up were not raised in those two rounds of review. Why?

“Clearly the IPCC needs a tighter process for checking its draft reports in future and setting up quite independent groups of top experts to undertake detailed reviews would improve things.

“However, the key point is that the IPCC is designed to deliver information on climate change to governments. So it would make sense to have a quick and independent review of the IPCC process, by the UN or another international body strongly regarded by policymakers.”

“The seminal commentary comes from Thomas Stocker, who reminds the reader that IPCC has an established set of principles that have led to the timely publication of four assessment reports. These have successfully meeting its mandate for summarising policy-relevant climate change science and well-considered consequences. Its past findings are proving to have been if anything conservative. The other four commentaries all propose alternative approaches but fail to acknowledge the practical difficulties and time required in developing a credible international organisation that will deliver a better-considered assessment than one following IPCC procedures.

“I find one comment in particular difficult to understand, that of Eduardo Zorita who states that “its undefined structure puts it at the mercy of pressure from advocates.” This seems to deny the existence of the structure and procedures established in 1988 and developed further over two decades (available along with the Assessment reports on the IPCC website).

“To me the way forward is clear – to continue to pursue the best possible science, with data openly available, for assessment at regular intervals, and to communicate results in the clearest possible language both to colleagues and the public.”

To talk to any of the experts quoted above contact the Science Media Centre on tel: 04 499 5476 or email: smc@sciencemediacentre.co.nz.

The Science Media Centre (SMC) is an independent source of expert comment and information for journalists covering science and technology in New Zealand. Our aim is to promote accurate, bias-free reporting on science and technology by helping the media work more closely with the scientific community. The SMC is an independent centre established by the Royal Society of New Zealand with funding from the Ministry of Research, Science and Technology. The views expressed in this Science Alert are those of the individuals and organisations indicated and do not reflect the views of the SMC or its employees. For further information about the centre, or to offer feedback, please email us at smc@sciencemediacentre.co.nz.