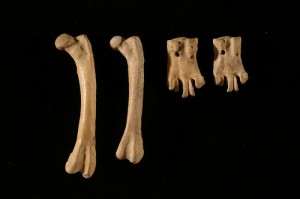 The hoiho or yellow-eyed penguin, one of our most charismatic native species, was a stranger to New Zealand until just a few hundred years ago, according to research out today from the University of Otago.

A newly-discovered penguin species, called the Waitaha penguin, once occupied the yellow-eyed’s range and was forced into extinction by human arrival between 1300 and 1500 AD.

PhD student Sanne Boessenkool set out to investigate changes in the yellow-eyed penguin population following human settlement.  Much to her surprise, her analysis of ancient DNA from prehistoric penguin bones revealed that they were not from yellow-eyeds, but from an entirely unknown species of penguin.

We’ve asked scientists to express their views on these new findings and their potential significance.

Dr David Penny of the Allan Wilson Center for Molecular Ecology and Evolution at Massey University says:
“This research is both important and very interesting, in that it adds to our knowledge of the consequences of human actions on plants and animals, which is an critical issue everywhere in the world.In order to understand the ongoing impacts, we need to know about past events, such as the extinction of the previously unknown penguin these researchers have discovered — one more of our native species that was naïve to humans and unable to adjust its behaviour to adapt to human presence.

“In addition, it is vitally important to know how species, such as the yellow-eyed penguin, are able to respond to new opportunities.  It is becoming apparent that some species can respond to things like climate change, and others cannot. The more we know, the more we can help.”

Dr Jon Waters, Department of Zoology at University of Otago and co-author of this paper, says:
“This research highlights the fact that we still have a great deal to learn about New Zealand’s natural history, and especially about the impact of human arrival here. Who knows what other fascinating stories might have been overlooked?

“More broadly, this penguin study indicates that we inhabit a highly dynamic part of the world – an idea that contrasts with the more traditional view of an ancient and relatively unchanging New Zealand biota inherited from Gondwana. It is now becoming clear, for instance, that species respond rapidly to human-mediated impacts such as climate change and extinction.

“The ancient DNA approach used in this penguin study is enormously powerful as it provides a direct means of characterising historical biodiversity. When coupled with more traditional techniques, this method has potential to revolutionise our understanding of the past.”

Dr Steve Trewick, Senior Lecturer: Evolution, Research Fellow: Allan Wilson Centre for Molecular Ecology and Evolution at Massey University, says:
“The paper certainly contributes to the growing body of evidence on the relative youth of much of New Zealand’s biota, contrary to the popular view that has prevailed during the last 50 years.

“The finding that penguins suffered directly and severely from the first human colonists, is useful but perhaps not surprising; it might have been a surprise to discover that humans did not take full advantage of so vulnerable a prey.

“More exciting is the demonstration of biotic replacement (in this case by penguins from Subantarctic islands), which provides a much needed reminder that observations of biotic assemblages made at one point in time (now) are unreliable evidence of what occurred in the past.

“The capacity for penguins to colonise and recolonise is evident from studies of little blue penguin. Molecular data have here provided the potent evidence for this dynamism, just as similar data revealed that fewer moa species existed than originally thought, and that rails such as the takahe have evolved many times in New Zealand (and elsewhere) from repeated colonisation events (by flying relatives). In the case of Megadyptes (the yellow-eyed penguin), extinction by humans was probably the catalyst for successful colonisation, but before humans arrived environmental and evolutionary process must have facilitated reoccupation, replacement and character divergence.

“This intersection of ecology and molecular phylogenetics continues to provide the most compelling demonstrations of evolution, often in relatively short time frames.”

Dr Phil Seddon, Director of the Wildlife Management Programme at University of Otago and co-author of this paper, says:
“The traditional understanding has always been that the native species we see around us in New Zealand today are the hardy remnants of a pre-human biodiversity. What these unexpected results highlight is the dynamic nature of ecosystem change, where the loss of one species may open up opportunities for the expansion of another.

“On one hand, hidden extinctions may be a more common feature of New Zealand’s recent past than we realise. But on the other hand, we can be heartened by evidence of the resilience of endemic species such as Yellow-eyed Penguins, which are able to flourish when conditions are favourable.

“As ever, the conservation challenge remains the creation and maintenance of conditions that allow our wildlife to persist, even in the face of human-mediated threats, such as habitat loss, invasive species, over-harvest and global climate change.”

Prof David Lambert, Griffith University, School of Environment and School of Biomolecular and Physical Sciences, (formerly of Massey University), says:
“This is an interesting paper which employs modern and ancient DNA sequences to infer the status of mitochondrial DNA lineages of Megadyptes penguins from New Zealand and sub-Antarctic islands.  The authors have discovered three lineages of these penguins and suggest that there are two species among them.

“The history of New Zealand animal taxonomy is strewn with examples of species described on the basis of limited genetic differences among geographically separated populations.  To determine the species status of such populations is always difficult.

“The authors also argue that Yellow-eyed penguins only recently invaded the mainland of New Zealand and were able to do this because of vacant habitats resulting from the extinction of a previously undescribed sister species.  However, as the authors acknowledge, three of the 42 “prehistoric” bones they analysed from mainland New Zealand were indeed Yellow-eyed penguins.  This finding leaves the possibility that the Yellow-eyed penguins have always inhabited the mainland of New Zealand.  Still, this is an interesting study and is likely to stimulate useful debate, particularly about the conservation status of this species.”

To talk to these or other scientists on this topic, please contact the Science Media Centre on tel: 04 499 5476 or email: smc@sciencemediacentre.co.nz.

Photo resources and a copy of the original research paper are available on the SMC website. To access them, please register and login to the Resource Library.

Notes to the Editor:
The Science Media Centre (SMC) is an independent source of expert comment and information for journalists covering science and technology in New Zealand. Our aim is to promote accurate, bias-free reporting on science and technology by helping the media work more closely with the scientific community. The SMC is an independent centre established by the Royal Society of New Zealand with funding from the Ministry of Research, Science and Technology. The views expressed in this Science Alert are those of the individuals and organisations indicated and do not reflect the views of the SMC or its employees. For further information about the centre, or to offer feedback, please email us at smc@sciencemediacentre.co.nz.