Uncertainty is part of the process

Science cannot prove a negative – no matter how many carefully designed experiments they’ve already run, scientists will never be able to say, they’re “100% certain” that something is safe. That’s because they are always open to the possibility that new research tomorrow could overturn current understanding. This flexibility of approach is one of science’s great strengths. 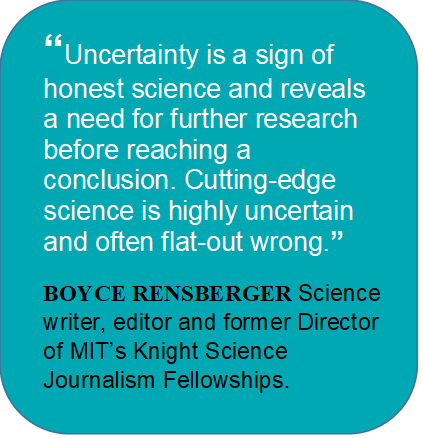 That said, when the studies start to stack up, most scientists will agree that they’ve done everything in their power to rule out a given risk or association. Accept a “high confidence” level as the scientist’s most strongly worded statement on the subject, and don’t vilify scientists who won’t categorically rule out a given possibility.

Experts may focus on the gaps in knowledge

Qualifiers and caveats are essential

Sub-editors hate them, but qualifiers indicate the level of scientific uncertainty and are not the result of weak writing in science-related stories. If scientists are uncertain about their results, it’s important to report this accurately. Leave notes to the sub-editors when you file your story to try and avoid qualifiers and caveats being cut and inappropriate headlines being created for your stories.

It can be tempting to spin a yarn from a well-crafted press release and the one scientist it quotes, but you need to get views from other scientists, particularly when dealing with uncertainty in results. Scientists are often too close to their work to accurately say how much weight their findings should be given. Check their claims against the peer-reviewed literature and their peers.

Sometimes media reports give the impression that scientists can’t even agree on the basics. But as you’ve already read in this guide, science is a process and the big picture changes as new studies are completed and scientists add to the body of work that came before them. Contrasting scientific views should be noted but not beaten up to suggest uncertainty reigns supreme.

Be careful about “duelling experts”

There’s nothing as quote-worthy as a good argument between experts. But two opposing talking heads doesn’t mean a rift in the scientific community. Be careful you are not making the science out to be less certain than it actually is by playing up disagreement between scientists. Go to scientific bodies, societies and associations for a big picture view.

A science-related story may originate from a politician, lobby group or a man in the street. While their points of view are important, save the discussion of scientific uncertainty to experts in the topic under discussion.

Back to Covering Science