‘Giving both sides their due’ is a basic principle of newsgathering, particularly when covering political and social debates. But good reporting on science issues requires more than a ‘he says, she says’ approach to balance.

In science, claims need to be backed by evidence. Science, at its best, embraces transparency and subjects new results to intensive scrutiny. Persuasive arguments are not enough — science advances by accumulating evidence to support, refine or overturn current understanding.

Scientific consensus evolves over time, but the majority opinion represents the cumulative effort of thousands of scientists around the world and carries the weight of countless hours of analysis and refinement.

The best way to provide balance and help the public gauge the truth of competing claims is to provide this essential context for a research report or scientific viewpoint. 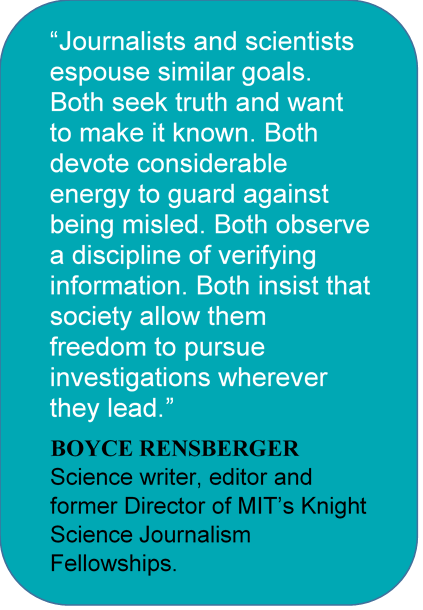 The balance of evidence

On controversial issues, rather than merely presenting opposing views of the science, it’s important to weigh their merits. Scientists engage in vigorous debate as a way of progressing understanding within their fields. From an outsider’s perspective, it can be easy to mistake normal debate over a nuanced interpretation of the facts for a more fundamental controversy.

The majority opinion may not always be right, but a solitary dissenting voice or outlier study doesn’t always deserve an equal platform. Before including such counterpoints, consider whether the audience will be able to fairly take away what the relative merits are of the evidence backing up each side’s case.

Scientific claims that fall outside the mainstream should be approached with healthy scepticism. Beware of isolated, obscure or long out-of-date research findings. A single study or two can easily present a distorted view of the science when taken out of context. The more extraordinary the claim, the more extraordinary the evidence required to back it up.

Of course, figuring out how much credibility a scientific opinion deserves can require substantial background knowledge. Start by looking into what research has already been published on the topic, and what major peer-reviewed assessments or reviews have to say about it.

Supplement what you can find out on your own by consulting scientists who are knowledgeable in the field, but not directly involved with the research in question. The Science Media Centre can help suggest relevant experts.

Some things to consider when choosing sources:

Bear in mind that there is often a diverse range of opinion within the scientific consensus. By exploring several scientists’ views, you may uncover new angles that hold more interest than a predictable retread of the same debate.

Back to Covering Science