Rescuers were out at first light this morning attempting to rescue pilot whales after a mass stranding of over 400 animals on Farewell Spit. 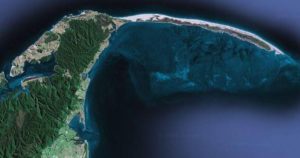 Department of Conservation (DOC) Golden Bay operations manager Andrew Lamason told media that whales were reported to be “milling about” the spit on Thursday night. The mass stranding, estimated as 416 animals, was discovered first thing Friday. An estimated 70 per cent of the whales had died overnight. The numbers put the stranding at the third largest recorded in New Zealand.

University of Otago zoologist Dr Liz Slooten told Radio NZ that it was unlikely that seismic testing caused the stranding, but that the cause may never be known. The last seismic survey in the area was done nearly a week ago, making it an unlikely factor in the overnight stranding.

She said pilot whales have strong social bonds, meaning only one or two whales could actually be in trouble but the rest of the group will not leave.

Marine biologist Jochen Zaeschmar told stuff.co.nz that part of the region’s problem was that Farewell Spit extended so far into Cook Strait. “Inside it you get these massive mudflats where the tide goes out for 5km,” he said. “They’re [whales] swimming along, then the next thing they know the water literally runs out from underneath them.”

Marine biologist Ingrid Visser told Radio NZ that necropsies would be taken on the beach, in the hope that samples would help ascertain what caused the stranding “so that we’ll have a better understanding of how we can help these animals in the future”.

The stranding has been covered widely by local media, including: