An early morning earthquake off the coast of the East Cape rattled many from their beds and sparked a tsunami warning. 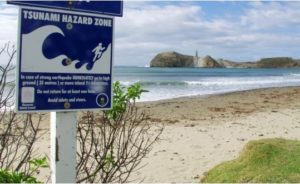 The Science Media Centre asked GNS Science seismologist Dr John Ristau to answer some questions about earthquakes in the region. Please feel free to use this Q&A in your reporting.

What is the seismicity of this area? Are such earthquakes common?

“The area along the east coast of the North Island and north of East Cape is one of the more seismically active regions of New Zealand. The seismicity is associated with the Pacific Plate pushing (subducting) beneath the Australian Plate, which the North Island is part of.

“In addition to these, earthquakes with M > 5 occur fairly often.”

What might happen next? How long are aftershocks likely to continue and what size might they be?

“The aftershock sequence is likely to continue for an extended period of time. Our group of statistical seismologists are working on detailed aftershock forecasts and we will have more information on that soon.

“The aftershocks for the 1995 M 7.2 earthquake continued for around two years, and since this earthquake is similar in size it will likely have a similar aftershock sequence.

“The largest aftershock for earthquakes like this are typically about 1 magnitude unit smaller than the mainshock, and we have had a M 6.2 aftershock. There have also been several with M 5 – 6 which is what we would expect, and a large number with M 4 – 5.

What is the mechanism by which such an earthquake can potentially cause a tsunami?

“To produce a tsunami an earthquake must cause a large displacement in the sea floor, which in turn displaces a large amount of water. Without these conditions, a tsunami does not occur. This means the earthquake must be large and shallow.

“Typically tsunamis are produced by very large earthquakes which occur on the boundary between two tectonic plates, where one plate is subducting beneath the other. Examples include the 2004 Sumatra earthquake which caused the tsunami in the Indian Ocean, and the 2011 Japanese earthquake and tsunami.

“This morning’s earthquake was much smaller than these earthquakes, and occurred below the boundary of the Australian and Pacific Plates, but did generate enough displacement of the seafloor to cause a small tsunami of around 25 cm at East Cape.

“The other method by which tsunami can be produced is by an undersea landslide; however, it does not appear that was the case here.”

What do we know about historic earthquakes and tsunami for this region?

“As mentioned above, there was a M 7.2 earthquake in this region in 1995. In 1947 there were two earthquakes off the coast of Gisborne with magnitude about M 7 which produced tsunamis with heights of several metres.

“These were a special type of earthquake called slow-rupture tsunami earthquakes. With these earthquakes the speed at which the fault ruptures is much slower than is typical for an earthquake, and as a result it causes a large displacement in the seafloor but does not produce significant high-frequency energy.

“The high-frequency energy is what people normally feel, which means the earthquakes were only weakly felt and no one was aware that a large tsunami was approaching.”

What kind of systems do we have to measure offshore earthquakes and measure/model tsunami risk?

“GeoNet also operates a network of GPS instruments which can be used to model larger earthquakes and provide valuable information on the source (e.g. whether there is more than one fault plane involved).