A healthcare department in Dallas, Texas, USA, has reported a case of Zika virus infection acquired through sexual intercourse rather than mosquito bite. 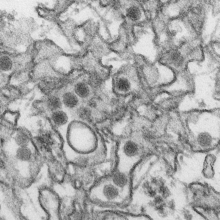 Officials at Dallas County Health and Human Services (DCHHS) have received confirmation from the Centers for Disease Control and Prevention (CDC) of the first Zika virus case acquired through sexual transmission in Dallas County in 2016. The patient was infected with the virus after having sexual contact with an ill individual who returned from a country where Zika virus is present.

“Now that we know Zika virus can be transmitted through sex, this increases our awareness campaign in  educating the public about protecting themselves and others,” said Zachary Thompson, director of .

“Next to abstinence, condoms are the best prevention method against any sexually-transmitted infections.”

Our colleagues at the UK SMC collected the following expert commentary.

“Even though this report suggests that Zika virus might be sexually transmitted, it doesn’t yet change the overall picture that Zika is spreading in the Americas primarily through mosquito bites.

“It’s not unusual to see cases of a virus infection that can be put down to rare transmission routes. Take hepatitis C virus for example – few of us would argue against the evidence that sexual transmission takes place, yet even fewer would argue that this is the major route of transmission.

“With Zika, mosquitoes remain the main reason for the current outbreak, but this finding does support advice that a man should seriously consider using condoms if they have potentially been exposed to, or are infected with, Zika, if their partner is or might become pregnant.”

“While a previous case of possible sexual transmission was documented a few years ago, this new case of reported potential sexual transmission further emphasises the ongoing need for research into Zika virus, its presence in semen and how long it may potentially remain in semen follow recovery from acute infection.

“The important action to take from this case is to ensure that all men in affected countries and male travellers returning from affected regions ensure they practice safe sex and use condoms, particularly if they are unwell with any symptoms that might suggest they are infected with Zika virus such as fever, headache, muscle pains, joint pains, a rash and conjunctivitis. This is essential if their partners are pregnant. In the case of returning travellers, if their partners are looking to become pregnant within 6 months of their return from an affected area they should consult a health care professional to discuss the situation.”

“The report of an isolated case of Zika being transmitted through ‘sex’ should be treated with caution but warrants greater investigation. Zika remains a disease primarily spread through mosquito bites (which warrants protection against getting bitten).

“If it is confirmed to be sexually transmitted then this opens up a second route to Zika transmission – disease models need greater clarity on all aspects of transmission to provide relevant predictions of the likely public health impacts of Zika.”

Prof Matthew Baylis, Chair of Veterinary Epidemiology; Head of the Liverpool University Climate and Infectious Diseases of Animals (LUCINDA) group; Head of the Department of Epidemiology and Population Health, Institute of Infection and Global Health, University of Liverpool, said:

“The reported finding of sexual transmission of Zika virus is very unusual. Zika is a member of the flavivirus family (which also includes Yellow Fever virus, dengue virus, West Nile virus and many other viruses primarily spread by mosquito vectors) and I do not know of any others in this family that have been shown to be sexually transmitted.

“As we saw with Ebola viral disease, it may be that the unprecedented number of cases, and close scientific and medical scrutiny, are revealing transmission routes that have not been recorded before.

“This route of transmission may be sufficiently rare (compared to spread by mosquitoes) that it will have little impact on the spread of the outbreak. Further research is clearly needed in this regard.

“The reported finding is, however, of clear medical significance and indicates the possible need for behaviour change in sexually-active men who may put pregnant partners at risk of acquiring the infection.”

“The reporting of a potential sexually transmitted case of Zika virus in Texas, USA might at first come as a surprise but this is not the first documented case of possible sexual transmission.  In 2008, an American scientist on a field trip to Senegal became infected with Zika virus and is thought to have transmitted it to his wife through sexual contact on this return home.  Zika virus has also been found in semen from an individual who was infected during the 2013 outbreak in French Polynesia.

“The Texas case further vindicates Public Health England’s guidance released at the weekend, namely that men who have recently returned from an area where Zika virus has been reported and experienced flu-like symptoms associated with the infection should use condoms.

“At the moment the implications and additional risk associated with sexual transmission of Zika virus are unknown.  Given the information we have, potentially over a million cases of Zika caused by mosquito transmission versus two cases of sexual transmission, the additional risk appears small.  However, this is precisely the type of question that researchers are now seeking to answer with the additional funding and resource made available following the WHO statement yesterday declaring the potential link between Zika virus and microcephaly as a public health emergency of internal concern.”

“There are very few documented cases of direct person to person transmission via sexual transmission and currently this route is considered to be extremely rare.

“The case reported from the USA today is not the first evidence of sexual transmission. One person in Colorado, USA  contracted the virus in Senegal, Africa, in 2008 and transmitted the virus to his wife after his return to the USA. Direct contact was implicated at that time because his wife had not travelled and there were no suitable mosquitoes in Colorado. This was most likely the first sexually transmitted infection in the USA.

“In previous years, one person in Tahiti also had blood in his sperm and its virology examination reported it contained the virus.

“There is no systematic information on the duration of excretion of the virus in sexual secretions and studies are needed to document whether it remains infectious beyond a few weeks.  It is thus advisable adults exposed to Zika follow the recommendation of using condoms until more information becomes available.”

“There are reports of infectious Zika virus being detected in sperm, and sexual transmission of Zika probably occurred between a husband and wife in Colorado in 2008.

“So this new report from Dallas is not entirely unexpected, but it is certainly unwelcome. It adds weight to the evidence that sexual transmission is a real risk, and raises many questions and dilemmas.

“This highlights our ignorance of this virus and the need for an urgent, comprehensive and coordinated research response.”

“This is the second case in the USA of sexually transmitted Zika, not the first as being reported. The first was Dr Brian Foy of Colorado in 2008 following his trip to Senegal. Dr Foy’s wife contracted the virus later.  Both were confirmed serologically.  Their children did not contract , thus ruling out general contact as a transmission route.  Sexual transmission was regarded as the most probable route. Dr Foy reported genital pain during his illness, which matches the other documented case, from Polynesia in 2013, when a man reported haematospermia and had Zika virus in his seminal fluid.

“The main implication is that unprotected sex should be avoided both when visiting affected areas, and also after recovery from any feverish illness contracted during visits to such an area until absence of virus in seminal fluid can be confirmed.