Kiwi evolved specially adapted smell detectors to help them cope with nocturnal life, according to a new study that has mapped out the genome-the entire genetic code-of the North Island brown kiwi. 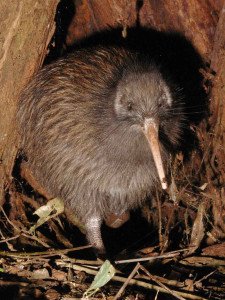 The genetic blueprint for our national bird, mapped by a team of European scientists, has been published in the open access journal Genome Biology.

Not only was the kiwi genome found to be one of the largest bird genomes sequenced to date, but the team also identified evolutionary changes in its genome that help explain the bird’s unique adaptations to nocturnality – a behaviour found in fewer than 3 per cent of all bird species.

Analysis of genes related to sight and smell suggested that kiwi may lack colour vision and have a better than average sense of smell for a bird, relying on odours to help it forage for food at night.

Read more in a Genome Biology press release on Scimex.org.

“This study gives insight into how and when some of the unique features of kiwi evolved, such as its excellent sense of smell. However, this extensive new genetic data set won’t stop the decline of kiwi in the wild-currently at 2 per cent per year-which is largely from predation by introduced mammals. New funding for kiwi predator control announced in this year’s budget will hopefully halt this decline.”

“The publication of a high quality bird genome for an iconic threatened species like the North Island brown kiwi is exciting. Of the more than 10,000 bird species worldwide, a mere 50 of them have a readily available genome.

“Given that bird genomes are small, compact and highly conserved, the publication of the kiwi genome will help pave the way for a new era in the conservation of bird biodiversity in New Zealand. Indeed, the number of genomes available for New Zealand native birds is growing and I am confident that we are about to witness a surge of conservation genomics research in New Zealand.

“Using a high quality genome like that generated for the North Island brown kiwi will allow for the development of species-specific genomic resources. These resources will provide a more accurate representation of genome-wide diversity and better inform conservation management strategies to minimise the loss of genomic diversity, particularly for threatened birds like the North Island brown kiwi.”

“The paper is certainly interesting, and I basically agree with its conclusions. It should be helpful to those involved in conservation to know the underlying reasons for the special nature of the kiwi – in that it has lost genes for colour vision and gained new abilities in smell. This should help conservation efforts in that we know more about the real life-style of kiwi. My guess is that we suspected these things, but it is very good to know that there is now evidence for these abilities.

“Perhaps it is a little bit of a concern that the work needed to be done outside New Zealand, but it is very good that the work was done! Anyway, it should help reinforce the need for genomics and its interaction with conservation.”