Last night in Wellington Prof Shaun Hendy launched his new book Get Off the Grass, co-authored with the late Sir Paul Callaghan. The book argues that the key to economic growth in New Zealand is developing innovative, high tech niche markets rather than relying on our primary industries. 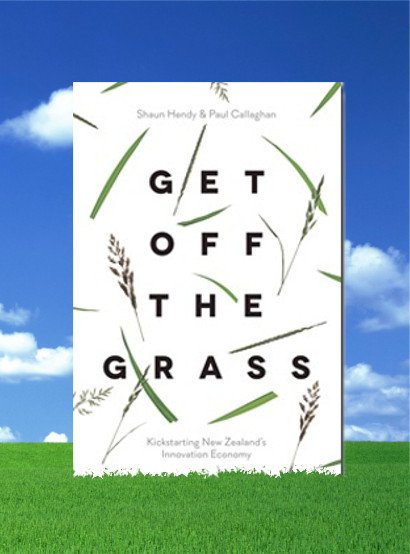 An excerpt (via New Zealand Herald):

Prosperity describes a state of flourishing or thriving. In New Zealand there is a sense that we have flourished less than we might, and especially less than many other countries we like to compare ourselves with. Through insufficient resources, our health system is unable to provide the treatments that are available for free in countries such as Australia or Canada. Our infrastructure is decrepit, our roads are poor, our passenger train systems are an embarrassment to us, and many of our houses are inadequate or, even when new, badly built. Our native forests are in decline because we cannot afford to address pest control in a comprehensive manner.

Our universities have been slipping in international rankings, solely because lack of investment has made it harder to retain and attract the best staff. Our young people see their futures abroad; we export 24 per cent of our university graduates. And now, we face the great crisis of our generation: the need to rebuild Christchurch at the same time as the rest of the world struggles out of a global recession. The cost of this rebuild has been variously estimated at up to $40 billion, much of which will ultimately fall on the shoulders of New Zealand taxpayers, at around $10,000 per citizen.

We make no apology in adopting the standpoint that prosperity does matter to New Zealanders, that we do need to grow wealth in this country. And despite the savage list of problems outlined above, this book will show that we can grow our prosperity; indeed we argue that it will not even be hard to do so. At the heart of the strategy proposed here is an emphasis on the role of innovation in a modern economy. Remarkably, we are well placed to grow our capability dramatically.

The book and its premise that New Zealand needs to move away from purely agricultural exports has received media attention, especially in the wake of the Fonterra botulism scare – an issue noted by Prof Hendy in his latest post on his blog A Measure of Science on the Sciblogs network.

Farmers Weekly: Kiwis told to get off the grass