Scientists using robotic underwater vehicles to map the bottom of Lake Rotomahana are certain they have found part of the Pink Terraces sitting on the lake floor. 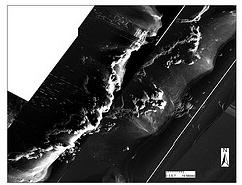 High resolution photos and side scan images of the Pink terraces uncovered by scientists are available here.

The discovery was made this week during a joint New Zealand-American project to map the lake floor and investigate the large geothermal system under the lake.

Side-scan sonar and bathymetric data collected by two Remus 100 autonomous underwater vehicles (AUVs) clearly show crescent-shaped terraced structures in about 60m of water where the Pink Terraces were located prior to 1886. They are covered by a brownish lake sediment.

The world famous Pink and White Terraces were destroyed and vanished in the eruption of Mt Tarawera on 10 June 1886. 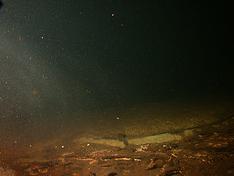 Project leader Cornel de Ronde, of GNS Science, said the team was elated at discovering what was once described as the eighth wonder of the natural world.

“The first sonar image gave a hint of a terraced structure so we scanned the area twice more and we are now 95 percent certain we are seeing the bottom two tiers of the Pink Terraces.”

Dr de Ronde said the rest of the Pink Terraces were either destroyed during the eruption, or are still concealed under thick sediment not able to be penetrated by the side-scan sonar signal.

The scientists found no sign of the larger White Terraces in the part of the lake that matched their location prior to 1886. The two terraces were separated by several hundred meters prior to the eruption.

The project was a collaboration involving GNS Science, Woods Hole Oceanographic Institution in Massachusetts, Lamont-Doherty Earth Observatory at Columbia University in New York, the National Oceanic and Atmospheric Administration in Seattle, and the University of Waikato.

“The original purpose of this 10-day mission was to map the lake floor and investigate the extensive geothermal system under Lake Rotomahana and how it evolved from an on-land geothermal system to a submerged one. Anything else was a bonus,”
Dr de Ronde said.

“This discovery puts to rest more than a century of speculation as to whether any part of the Pink and White Terraces survived the eruption. Highlights in a science career don’t come any better than this.”

“This result would not have been possible without the team from Woods Hole Oceanographic Institution and their American colleagues. Their contribution has been huge.”

Dr de Ronde also acknowledged support from the Te Arawa Lakes Trust Board, the University of Waikato for logistics support, and tourism operator Waimangu Volcanic Valley, which helped with access to the lake.

AUDIO AND SLIDES FROM THE JOINT SMC / GNS BRIEFING