That data is from the global mean surface land-ocean temperature index, available at http://data.giss.nasa.gov/gistemp/graphs/.  New Zealand has just had its warmest decade on record, according to NIWA at   http://www.niwa.co.nz/news-and-publications/news/all/nz-in-the-2000s-warmest-on-record.

In the New Zealand region 2009 started with our air temperatures close to the long term mean, but in May we dived into winter-like values, and then there was a very strange flat-line in Aug/Sep/Oct, finally returning to normal again towards the end of the year.

So, May, August and October stand out as the weirdest weather months of the past year.  Here are some snippets from NIWA’s monthly climate summaries (at http://www.niwa.co.nz/news-and-publications/publications/all/cs/monthly) describing these:

The May chill was caused by many low-pressure systems lingering just east of New Zealand, held there by a blocking anticyclone in the mid South Pacific Ocean.  This resulted in more southerly air flows than normal over New Zealand.  October’s weather patterns were similar to May’s, with troughs held near New Zealand by anticyclones over southeast Australia and the mid South Pacific. Preceding our weird October there was a memorable dust storm that hit Sydney, coincidentally right on the equinox. On 23 Sep. This storm was followed by three snowy lows over New Zealand.

The August warmth was also due to a blocking anticyclone, this time in the area east of New Zealand, feeding frequent northerly winds onto the country.  For more information on how our weather in the past year was affected by blocking anticyclones refer to the posting to www.metservice.com’s blog site entitled “Reflections on winter” by MetService’s manager of Public Weather Services, Peter Kreft.

The time sections above come from the Climate Diagnosis Centre on NOAA on their http://www.cdc.noaa.gov/map/time_plot/ web site.  These images help to give us a quick look at the full range of air temperature and its changes over New Zealand for the past year. For each day the air temperature for the longitudes from 165 degrees East to 180 are averaged producing a colour-coded line drawn from left to right for the latitudes from 50 to 35 degrees South.  Time runs down the graph so that December 2008 is at the top and November 2009 is at the bottom.

The image on the left shows our annual warming and cooling cycle – the hottest day (38ºC at Culverden on 8 February) stands out.  On the right we can see the variations from normal throughout the year, and the blueness of May and October stand out well compared with the redness of August.  Using this method of displaying the temperatures, a cold period over the South Island in mid to late February and the North Island in March is revealed – this cold period gets averaged out in the monthly statistics.

Here, for your records, are the monthly highlights for the past year:

20-23 Feb: Severe rain from the remains of TC INNIS brought surface flooding to parts of Wellington, Levin, and Palmerston North, and caused raw sewage to overflow into central Wellington.  In Tauranga, the severe rain caused the postponement of the Kapa Haka festival, the first time this had happened in 36 years.

5-7 Mar: A storm crossed Northland, Auckland, and Bay of Plenty with winds taking down trees and powerlines.

27 Apr: Heavy rain caused flooding in Westland. Homes were evacuated in Greymouth and roads became impassable. Trampers were stranded in Aoraki Mt Cook National Park, and about 120 people were evacuated from the Milford Track by helicopter.

11 May: Tornado in Warkworth. Waterspout was seen off Makatu. 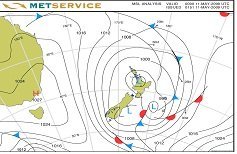 17 May: Tornado in Taranaki. Flooding hit South Canterbury, and, the next day, Otago.

21 May: Snow and ice stranded motorists on Central Plateau.

30 May: Snow to low levels in Canterbury and around Dannevirke.

28-30 Jun: A slow-moving low brought heavy rain, strong winds and thunderstorms to the north and northeast of the country. A civil defence emergency was put in place in Gisborne, as rain continued and rivers rose.

14 Sep: Extreme northwest wind gusts and record high Sep temperatures in eastern South Island (29ºC at Ashburton). A tree was blown on a Ute in Arrowtown. 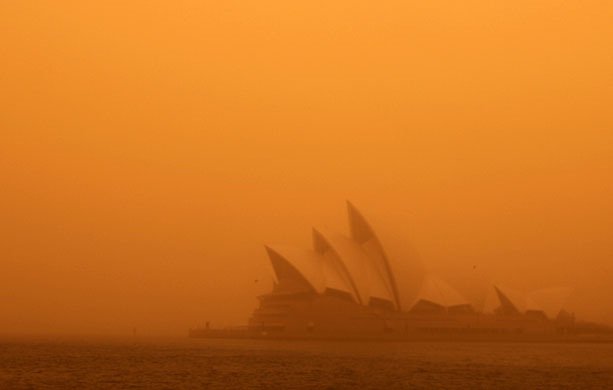 24 Sep: Deep low #1 brought snow to low levels between Norsewood and Woodville, and ice to many areas. 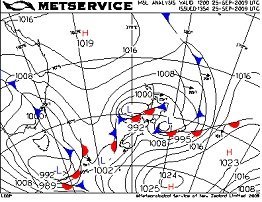 4-5 Oct: Deep low #2 brought snow to low levels in Hawke’s Bay and central Plateau, estimated to be greatest October snowfall in the area since 1967, killed thousands of lambs, closed roads and stranded hundreds of travellers.

6 Oct: Snow was observed in Taranaki, Waikato and Rotorua. 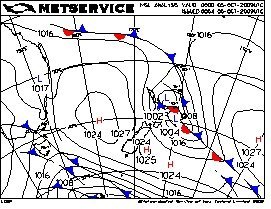 4 Nov: High winds blew a container ship off its moorings at Lyttelton Harbour.

13 Nov: A southerly buster hit Canterbury during the Royal Show and felled trees.

On behalf of MetService, I pass on to you my wishes that the weather will treat you prosperously in 2010.