Finance Minister Bill English this afternoon delivered the 2009-10 budget. The SMC has summarised the policy and funding decisions announced in relation to science, technology and R&D. 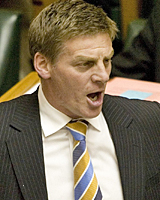 The SMC will be wrapping up comment from scientists on the budget. Email the SMC on smc@sciencemediacentre.co.nz to receive the comments this afternoon via email.

An extra $40 million over four years to the Crown Research Institute Capability Fund. This reinforces the ability of CRIs to maintain and develop their nationally significant research.

Funding of $36 million over four years to the Marsden Fund to provide for investigator-initiated excellent research.

New funding of $4 million over four years for the Prime Minister’s Science Prizes. The prizes will provide a funding boost for the winning scientists and put the spotlight on excellence in science.

Budget 2009 $323.3 million over four years for a campaign to fit homes with insulation and clean heating devices such as heat pumps and approved wood burners. The scheme, which is open to owners and occupiers of houses built before 2000, will start on July 1 this year.

Increasing funding for developing the Emissions Trading Scheme, including international linkages, by $6.9 million.

The Budget includes ($290 million) “implementation funding” for the first installment in the Government’s $1.5 billion roll-out of high-speed broadband.

In addition to the $1.5 billion broadband proposal, rural areas will benefit from a $48 million investment in broadband infrastructure. The details of this investment will be released soon.

After scrapping the former Labour government’s $700 million Fast Forward Fund for agricultural research and development, the Budget includes a new initiative of $190 million over the next four years.

The Primary Growth Partnership will see Government investing $70 million a year in sector innovation by 2012 to be matched dollar-for-dollar by the industry.

This is part of a total of $321 million of new money for research, science and technology.

No policy change in relation to R&D tax credits

No allocation for a climate science research centre. This was previously signaled in National’s Science policy paper last year.

No additional funds specifically for clean technologies
Here are links to further information, if required: