Lately it seems everyone is making podcasts, and New Zealand has been right on board with the trend with a burgeoning number of homegrown podcasts, many of which feature science journalism.

RNZ science producer Alison Ballance has long been reporting on kākāpō, including her book Kākāpō: Rescued from the Brink of Extinction. This year she has taken this a step further with a weekly podcast the Kākāpō Files, which has been following the latest breeding season in the flightless parrots. That’s meant covering the highs – such as the 75 living chicks and the season becoming the longest on record – and the tragic, including a spate of fungal infections and the death of several adults. 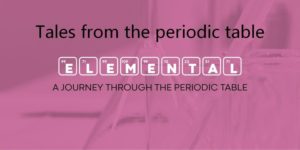 Meanwhile, in Elemental Ballance and AUT’s Professor Allan Blackman take a journey through the periodic table of elements to commemorate the International Year of the Periodic Table, marking 150 years since the first table was published by Dmitri Mendeleev. Working in alphabetical order, each episode delves into one element to talk about its chemistry and history.

Professor Blackman is also involved in a weekly science slot on 96bFM, Dear Science, along with AUT’s Marcus Jones, which is also available as a podcast.

The Detail launched at the end of April as a weekday morning show funded by the RNZ/NZ On Air Innovation Fund and hosted by Sharon Brettkelly and Alex Ashton. Each weekday morning the team does a deep dive into a particular issue, which so far has featured Newroom science editor Eloise Gibson talking about the Zero Carbon Bill, and Newsroom journalist Farah Hancock on vaccination.

Also funded by the RNZ/NZ On Air Innovation Fund – a one-off fund provided in Budget 2018 – is Michelle Dickinson’s Nanogirl’s Great Science Adventures. Each episode aims to answer children’s questions, including why do stars twinkle, are all bacteria bad, and can we bring dinosaurs back to life – and an experiment for kids to try.

NZME’s The Front Page podcast, which started as a daily wrap up has now shifted to a weekly, 30-minute long show focused on telling the ‘behind the scenes’ stories of the newsroom’s stories. Last week’s episode focused on environmental issues and “eco anxiety”, interviewing NZ Herald science reporter Jamie Morton and general reporter Michael Nielsen, who has been working on stories about the Hauraki Gulf. Episodes are released on podcast apps one week after being published on the Herald Premium.

University of Canterbury Associate Professor Christoph Bartneck has also launched a podcast series exploring how humans and robots interact with each other, while Plant & Food Research has its own show, scigest, presenting stories about the institute’s research.