Environment officials say they have no plans to continue creating a National Environmental Standard (NES) for future sea level rise – instead they will leave it up to individual councils to make separate plans. 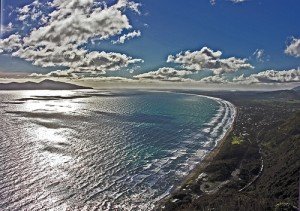 Though the exact sea level rise over the next few centuries is expected to vary from one region of the world to another — sometimes partly dependent on the latitude of the coastline — it is expected to be similar along all the NZ coast.

The Ministry for the Environment (MfE) was looking at setting a mandatory minimum projected sea level rise which councils would have had to take into account when planning for the effects of future climate change, and said on its website: “We are in the process of identifying information to support the need for the proposed NES on future sea level rise”

But today they told the SMC: “At this stage there are no plans to progress the proposed NES.

“The Minister for the Environment has made it clear that current guidance provides local government with both the information and the flexibility to plan locally for rises in seas levels.

“Local councils are best placed to assess the risk and plan for future sea level rises in their specific areas,” an MfE spokesperson said.

On the MfE website, the ministry had previously said that it wanted to see councils planning for 80cm of rise in sea levels this century, two or three times the level signalled in a Government manual for councils, which suggested a rise of 0.26m to 0.38m by the 2090s relative to the average for 1980-1999.

In outlining the NES, the ministry said that individual councils trying to pick an appropriate sea-level rise projection for their planners could be subject to “constant re-litigation” of whatever numbers they chose.

So its officials were looking at the potential to set a national environmental standard (NES) with which councils would have to comply. This would not only reduce the costs and delays for each coastal authority to pick their own projected level of sea-rise, but reduce the risk of continuing argument over the choice, and allow the levels to be updated as new research becomes available.

Officials wanted to set an NES that prescribes a base amount of future sea-level rise to plan for, and requires councillors to consider the consequences of higher sea-levels.

They planned for the standard to be based on the Ministry for the Environment guidance manual Coastal Hazards and Climate Change: A Guidance Manual for Local Government in New Zealand – setting a base value sea-level rise of 0.5 m relative to the 1980-1999 average, along with an assessment of the potential consequences from a range of possible higher sea-level rise values.

“At the very least, all assessments will consider the consequences of a mean sea-level rise of at least 0.8 m relative to the 1980-1999 average,” the MfE said. Beyond 2100 councils would have been required to allow for sea-level rise of 10 mm a year, every year.

At present, the basic range of sea-level rise projected in the IPCC Fourth Assessment Report is a rise of 0.18m-0.59 m by the mid-2090s relative to the average sea level over 1980-1999 – but that did not take into account factors such as meltwater from glaciers and other ice on land.

But some central and local government agencies are already making provision for higher rates of sea level rise.

Transit New Zealand considers climate change in the planning of major long-life infrastructure such as bridges, culverts, and causeways. The new section of causeway for Auckland’s Upper Harbour Corridor (State Highway 18) was built 0.3 metres higher than the existing causeway – which was then raised to match it – in direct response to predicted sea-level rise.

An MfE summary of its Climate Change Effects and Impacts Assessment also reflected the old IPCC figures: “At least 18-59 cm rise (New Zealand average) between 1990 and 2100”, and warns: “All proposed developments near the coast should be evaluated in terms of expected sea-level rise over this century, as well as other consequential effects such as increased coastal erosion, salt water intrusion into aquifers, and increased flooding”.

The Science Media Centre approached councils for their current planning projections. Here are the responses we received:

Environment Bay of Plenty: “It’s 0.49m in official figures in our regional coastal plan, but it’s an estimate and in practice more recent figures would be used”.

Wellington Regional Council: “We have been using a figure of a 1 metre rise by 2100 … we are currently embarking on a study to check that assumption”.

Christchurch City Council: “Half a metre, as per the Ministry guidelines”.

Environment Canterbury: “ECan is not using a figure in terms of future sea-level rise. To do this, we will need to review the Regional Coastal Environment Plan … next year. We do however, operate Coastal Hazard Zones which have rules controlling development in areas likely to disappear into the sea within the next 100 years (based on projections of current erosion rates)”.

West Coast Regional Council: “No one particular sea level rise estimate is used on consents for rock protection structures protecting the coastal state highway in the coastal marine area. We are undertaking the 10 year review of our Regional Coastal Plan for the West Coast, and are considering adding a policy with sea level rise estimates from MFE’s 2008 “Coastal Hazards and Climate Change: A Guidance Manual for Local Government in New Zealand”, or from a more recent report by NIWA.”